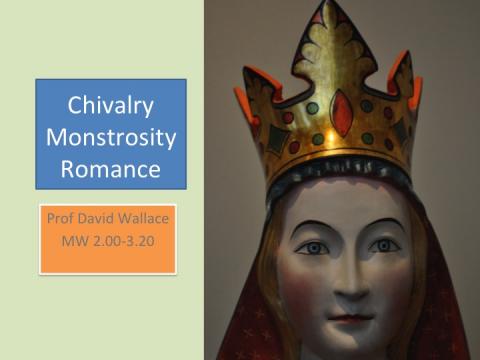 Romance, a genre invented in the Middle Ages, is seductive but difficult. It persuades us to relax, to be romanced away; yet while we are so enchanted all kinds of subliminal messages can be smuggled in, without our hardly noticing. It's no accident that national histories typically grow from romance, and that romance is the favored genre of the ruling (aristocratic) class.  Our class, then, will both fully enjoy the sweep and seduction of some great narratives while attempting, at the same time, to recognize how they are working their magic upon us.

This course begins with the Song of Roland, a text that fully acknowledges the power of Islam in southern Europe (in part by associating it with the gigantic, or the monstrous). We then move on to Geoffrey of Monmouth's History of the Kings of Britain, a text written to help bed down the Norman conquest of England in 1066. It is here, in a mythic history written by a man working at Oxford, but claiming Celtic (Welsh) ancestry, that we first meet King Arthur-- and also King Lear, Cordelia, and Cymbeline (as later adopted by Shakespeare). Geoffrey's History proves immensely influential. It provides the textual backbone of the genealogical (family) rolls held in Penn's special collections on the sixth floor of Van Pelt; MS roll 1066, now digitized, is especially wonderful, and you will have the opportunity to work with these materials. Geoffrey is still providing what is now an ideology of English nationhood in the reign of Queen Elizabeth I (1558-1603), especially in Sir Edmund Spenser's Faerie Queen. We will read Book II, in which Sir Guyon has many erotic adventures before meeting King Arthur and learning from Geoffrey's History.

Marie de France, writing for the elegant court of Henry II, loved romance but had limited patience for endless battles-- so she just left them out, concentrating on love dilemmas in her wonderful, short lais. She did, however, write Bisclavret, a werewolf story, and many other writers told tales of monsters, or men behaving monstrously-- such as Sir Gowther, a diabolical love child who rapes nuns. The Siege of Jerusalem extends its horrors to cannibalism and (sad to say) anti-semitic persecution; the text known as Cleanness conjures up scenes of global destruction, with the 'sexually deviant' coming to an especially bad end. This last text comes from the same manuscript as Sir Gawain and the Green Knight, a brilliant psychological thriller and an early classic of eco-criticism, and Pearl, a touching tale of a man who loses his infant daughter. We move on to Sir Thomas Malory's Morte Arthure, a composite book full of wonders, including a Grail quest, the love of Lancelot and Guinevere, and the rise of kitchen boy Sir Gareth. This brings us, finally, to Sir Edward Spenser (from the same aristocratic Spenser family as Diana, Princess of Wales). And here again romance works its spell even while engaging with hard historical realities: Spenser wrote his Faerie Queen even as he was working, on the ground, to help subjugate the native Irish.