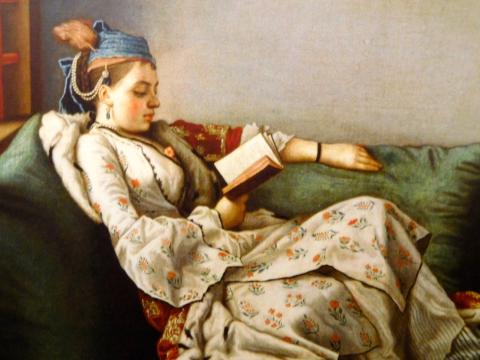 Premodern women, like all women, wondered what would remain of them in the future. How, if at all, would they be remembered? Could a woman’s life, historical and biological, become a life, a written record to survive the passage of time? And, if so, in what literary genre would their life be told? Most women found that their best hope of being remembered lay in behaving badly: that is, in ways that would provoke someone to write. They also found that the rise of universities, a great leap forward for men, brought a corresponding decrease in women’s educational opportunities; Virginia Woolf still finds herself being yelled at on the college lawns of Oxbridge in the 1920s. Women could receive a convent education-- but was restriction of movement worth exchanging for “freedom” of expression? Convents did at least offer the possibility of an all-female, female-governed society; what alternatives could be imagined once they had been banished from English by King Henry VIII?

Our course, covering a period from c. 1100-1700, unfolds through four phases. We begin with Hildegard of Bingen, a musician, scientist, biologist, sexologist, dramatist, jewellery designer, preacher and politician who achieved a range of things that no woman has since equalled. We then consider Christine of Markyate, a runaway bride, Marie de France, genius romancer and fabulist, and Heloise, the most famous lover of the Middle Ages and the author of great letters. Phase II begins with Julian of Norwich, a woman who had a near death experience that she then contemplated for the rest of her life. She once famously met with Margery Kempe, a housewife who had fourteen children before persuading her husband to give up sex, becoming a Euro-traveller, and composing the first autobiography in English. Phase III considers what becomes of women at times of extreme violence and political upheaval, in this instance the Reformation that saw England shifting, gradually, from Catholic to Protestant religion. Elizabeth Carey grows up Protestant, writes The Tragedy of Mariam, the first closet-play, but then disgracefully converts to Catholicism. Mary Sidney’s Englishing of the psalms is fiercely Calvinist (super-Protestant) and, as poetry, amazingly innovative. Mary Ward leaves England to become an enclosed Catholic nun, but returns to develop an illegal apostolate of the streets for poor Catholic people. Aemilia Lanyer lives, for a while, in an idyllic all-female society, in a large country house, but this (as so often) is broken up by the demands of the marriage market.

The final phase of the course brings us through the English civil war, which saw King Charles I beheaded in 1649, to the Restoration of 1660 and the coronation of Charles II, son of Charles I and Henrietta Maria of France. Convents are now a thing of the past in England, but nostalgia for all-female society lives on in plays such as The Convent of Pleasure and, more seriously, The Female Academy, both by Margaret Cavendish, Duchess of Newcastle. Cavendish eagerly keeps up with contemporary science, authors a feminist sci-fi utopia called Blazing World, and strategically exploits the resources of her own beauty.

There will be opportunities for class reports, for library visits, and for developing a friendly, collaborative atmosphere.

The first assignment will ask you to write your own life story in the third person as a saint’s life, an exercise in literary genre as well as self-expression (and a pass/fail writing tune up). The second and third assignments will be short essays and the fourth a longer one, with some research component; there will be no midterm or final.