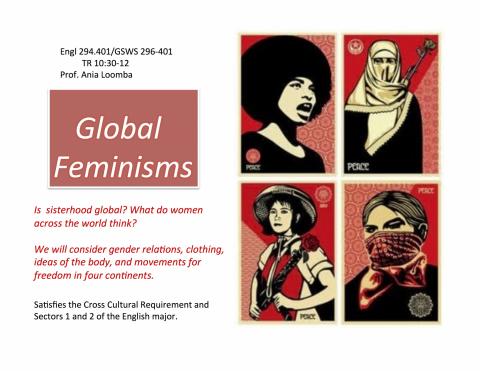 In 1984 Robyn Morgan’s acclaimed book proclaimed: Sisterhood is Global! But is it? Feminism has both united women and also generated debates between women of different races, locations and sexual orientations, not just across the world but also within the US. How should we, located in a prestigious US university, locate our own ideas about gender and sexuality in a global framework?

This course provides you with an opportunity to read and think about these alliances and differences. We will consider key writings about the family, sexuality, the body and agency. Topics covered will be varied; and include female circumcision, the veil, violence against women, global trafficking, the environmental crisis, and new forms of female labor.

Assignments include leading a class seminar on a topic of your choice, short responses every other week, and a final.

Satisfies the Cross Cultural Requirement of the College's General Education Curriculum; Fulfills Sectors 1 and 2 of the English major.