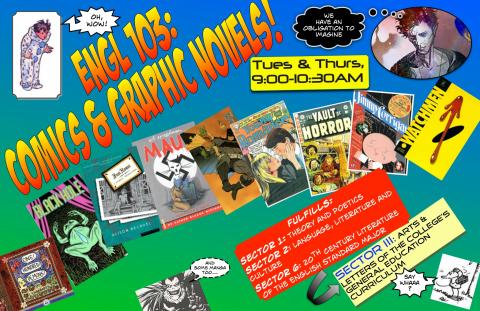 This course combines literary and historical approaches to investigate one of the most rapidly growing and increasingly influential forms of literature: the graphic novel. Popular yet understudied for over a century, comics are now critically recognized as a major form of communication and contemporary creative arts. The course represents an interdisciplinary approach to knowledge mirrored by the graphic novel’s joint ancestry in fine arts and literature. It will include a historical overview of the form’s development across the twentieth century, complete with analysis of relevant broader institutional and cultural factors illuminating the growth of American media culture more generally. Providing students with the critical skills necessary to read and understand this deceptively complex medium—and visual storytelling in general—the course exposes students to a series of works that define and redefine the genre while illustrating a variety of artistic & storytelling approaches to central themes of the American experience: politics, sexuality, class, censorship, violence, cultural and ethnic diversity.