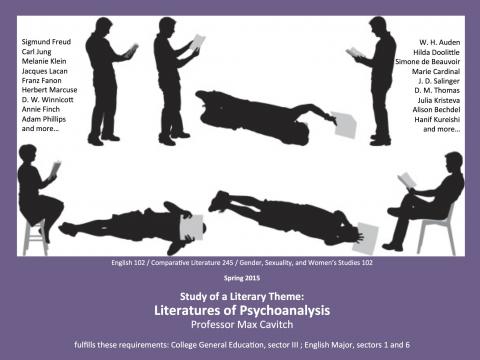 Along with its introduction to literary analysis, this course will provide an introduction to major psychoanalytic concepts (e.g. dreamwork, trauma, repression, the unconscious, the sexual and death drives, transference, the ego, dissociation, and unconscious fantasy) through the writings of a wide variety of its practitioners and commentators, from Sigmund Freud to the present day.  In addition to Freud’s foundational writings, we’ll read key selections from later psychoanalytic works that will further explore psychoanalytic ideas and movements, as well as: feminist, LGBT, and other social and political uses and critiques of psychoanalysis; the genre of the case study; and the expansion of psychoanalysis beyond the U.S. and Europe.  Literary works in genres such as the novel, the graphic novel, and the memoir will include Simone de Beauvoir, The Mandarins; Marie Cardinal, The Words to Say It; D. M. Thomas, The White Hotel; Alison Bechdel, Are You My Mother?; and Hanif Kureishi, Something to Tell You.  Coursework will include numerous very short assignments—both in-class and take-home—and two short essays.