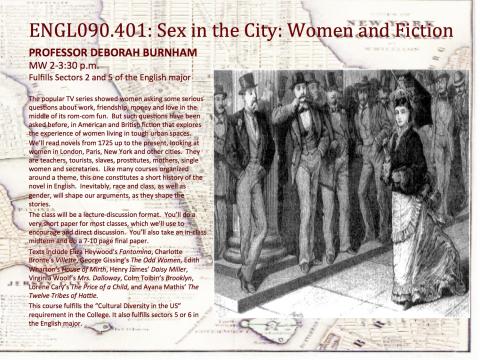 Sex and the City: Women, Novels and Urban Life

Sex in the CityThe popular TV series showed women asking some serious questions about work, friendship, money and love in the middle of its rom-com fun.  But such questions have been asked before, in American and British fiction that explores the experience of women living in tough urban spaces.  We’ll read (primarily) novels from the 19th and 20th centuries, up to the present, looking at women in London, Paris, New York and other cities.  They are teachers, tourists, slaves, prostitutes, mothers, single women and secretaries.  Like many courses organized around a theme, this one actually constitutes a short history of the novel in English.  Inevitably, race and class, as well as gender, will shape our arguments, just as they shape the stories.The class will be a lecture-discussion format.  You’ll do a very short paper for most classes, which we’ll use to encourage and direct discussion.  You’ll also take an in-class midterm and do a 7-10 page final paper. Texts include Charlotte Bronte’s Villette, George Gissing’s The Odd Women, Edith Wharton’s House of Mirth, Henry James’ Daisy Miller, Virginia Woolf’s Mrs. Dalloway, Michael Cunningham’s The Hours, Colm Toibin’s Brooklyn and Lorene Cary’s The Price of a Child. This course fulfills the “Cultural Diversity in the US” requirement in the College. It also fulfills sectors 5 or 6 in the English major.