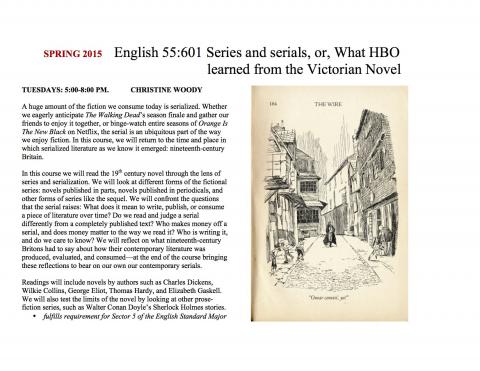 19th-Century Novel: Series and Serials, or, What HBO learned from the Victorian Novel

A huge amount of the fiction we consume today is serialized. Whether we eagerly anticipate The Walking Dead’s season finale and gather our
friends to enjoy it together, or binge-watch entire seasons of Orange Is The New Black on Netflix, the serial is an ubiquitous part of the way we enjoy fiction. In this course, we will return to the time and place in which serialized literature as we know it emerged: nineteenth-century Britain.

In this course we will read the 19th century novel through the lens of series and serialization. We will look at different forms of the fictional series: novels published in parts, novels published in periodicals, and other forms of series like the sequel. We will confront the questions that the serial raises: What does it mean to write, publish,
or consume a piece of literature over time? Do we read and judge a serial differently from a completely published text? Who makes money off a serial, and does money matter to the way we read it? Who is writing it, and do we care to know? We will reflect on what nineteenth-century Britons had to say about how their contemporary literature was produced, evaluated, and consumed—at the end of the course bringing these reflections to bear on our own our contemporary serials.

Readings will include novels by authors such as Charles Dickens, Wilkie Collins, George Eliot, Thomas Hardy, and Elizabeth Gaskell. We will also test the limits of the novel by looking at other prose-fiction series, such as Walter Conan Doyle’s Sherlock Holmes stories.