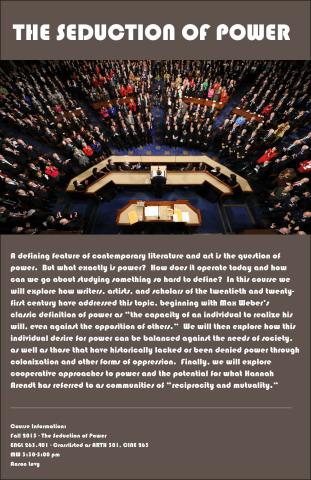 The Seduction of Power

A defining feature of contemporary literature and art is the question of power.  But what exactly is power?  How does it operate today and how can we go about studying something so hard to define?  In this course we will explore how writers, artists, and scholars of the twentieth and twenty-first century have addressed this topic, beginning with Max Weber’s classic definition of power as "the capacity of an individual to realize his will, even against the opposition of others.”  We will then explore how this individual desire for power can be balanced against the needs of society, as well as those that have historically lacked or been denied power through colonization and other forms of oppression.  Finally, we will explore cooperative approaches to power and the potential for what Hannah Arendt has referred to as communities of "reciprocity and mutuality.”