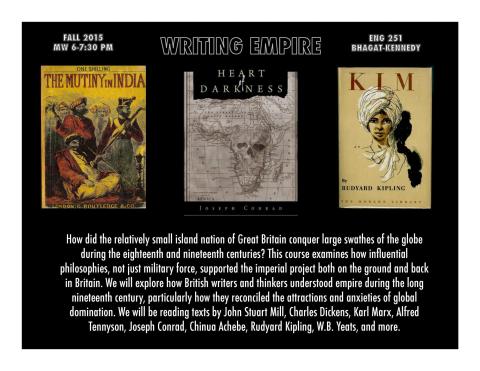 How did the small island nation of Great Britain conquer large swathes of the globe during the eighteenth and nineteenth centuries? This course examines how the British Empire deployed influential philosophies, not just military force, to justify colonialism both on the ground and back in Britain. We will explore how key British writers and thinkers understood imperialism during the long nineteenth century as we attempt to answer the following questions: What were the various motivations and apprehensions associated with imperialism? How does literature contribute to political projects? How were philosophies of liberalism reconciled with the oppressive nature of conquest? And what lessons can we derive for our modern moment? The course will pay particular attention to India though we will also consider Africa, Australia, and the Caribbean. In addition to fiction, we will examine philosophical treatises, newspaper accounts, government documents, and visual artifacts. Readings include works by Edmund Burke, Jeremy Bentham, John Stuart Mill, Charles Dickens, Joseph Conrad, Rudyard Kipling, and W.B. Yeats. Course requirements will include active participation, a presentation, and three essays (the first two at 4-6 pages and the final at 8-10 pages).