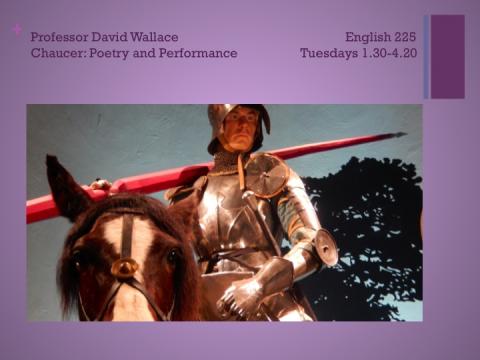 In this experimental weekly seminar we will study and perform the poetry of Geoffrey Chaucer, the most versatile and innovative of English writers. Writing before the age of print, before the age of mechanical reproduction, Chaucer assumed himself connected to each reader through a chain of hands: manu-script means, literally, written by hand. He further assumed that his poetry would be performed aloud, rather than read in silence; and that he would be fully visible in his creations as first person presence, an I who might be a dreamer and a pilgrim, rather than absent (as in much contemporary, if not modernist, fiction) as omniscient narrator. Writing as literary English is an unstable and plastic medium, just forming from confluences of differing languages (Anglo-Saxon and Norse; Anglo-Norman and French, Latin, and Italian), he has the unique opportunity (available to no other great poet) of composing without a canonical tradition at his back, pre-determining his choices: he is free to invent, to adapt, to be the first in English. And he seizes his unique opportunity with gusto, writing across a huge range of literary genres: dream visions, animal fables, knightly adventures, ars[e]-metrick (measuring the physical and social dynamics of a fart), saints’ lives, orientalist fantasies, representations of Islam and of Judaism, classical legends, and so on. In performing Chaucer’s poetry Chaucer’s fictional creations are especially concerned to manipulate and persuade you, as targeted audience: especially talented performers here include the Wife of Bath (looking for her sixth husband), and a hermaphrodite Pardoner (who wants to sell you travel insurance, for the protection of your immortal soul).

Poets down the centuries have derived great freedom and inspiration from Chaucer; all of them have envied the exceptional freedom of expression that Chaucer found in his new, fresh medium: English. Recent admirers and imitators include Sylvia Plath, Marilyn Nelson, and Caroline Bergvall. Marilyn Nelson, having studied Chaucer at Penn more than thirty year ago, was recently poet laureate of Connecticut; her Cachoeira Tales, written in neo-Chaucerian metre, sees a diverse group of African-Americans go on pilgrimage. Caroline Bergvall, a language poet and performance artist, and a frequent visitor to Penn, applies her study of the language and especially sound of Chaucer’s Middle English to Meddle English, her brilliant poetic adaptation of the form. Film-makers, auteurs and amateurs, have also taken inspiration from Chaucer. Notable here is Pier Paolo Pasolini, with his Racconti di Canterbury (part of a trilogy with the Decameron and the Arabian Nights), and a series of directors commissioned by the BBC. The most recent theatrical adaptation, by Mike Poulton, was for the Royal Shakespeare Company: how might the meanings of such theatre change as its audiences change, from one location or country to another?

The first part of this course will see us immersing ourselves in the idiom of Chaucer’s poetry, getting a feeling for its language and tale-telling techniques. Since fourteenth-century English will be new to most we will not rush, averaging about 500 lines per class. There will be much reading aloud, since every reading is an act of interpretation. We will often challenge ourselves to etymologize that: to figure out what a word means from its constituent parts (e.g. daisy: from the Old English “day’s eye,” applied to a flower that opens and closes with the coming and going of the sun). We will come to realize how many words we habitually use sink deep etymological roots into Chaucer’s English (e.g. “gossip”); the linguistic crust we walk on every day is still, invisibly, Chaucer’s.

First assessments will be simple language tests, accompanying our deepening feel for the language. After that you can work with increasing independence: by writing conventional critical essays on texts by Chaucer, by writing on adaptations in poetry or drama and film, by staging performances or making video adaptations (with production notes). There will be no midterm or final. Chaucer’s world is your oyster.