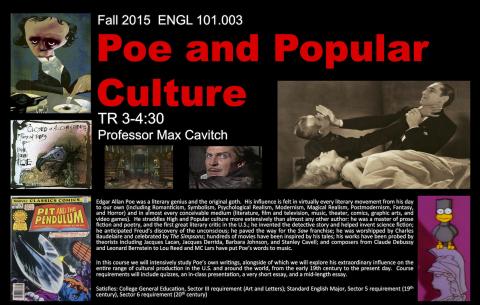 Edgar Allan Poe was a literary genius and the original goth.  His influence is felt in virtually every literary movement from his day to our own (including Romanticism, Symbolism, Psychological Realism, Modernism, Magical Realism, Postmodernism, Fantasy, and Horror) and in almost every conceivable medium (literature, film and television, music, theater, comics, graphic arts, and video games).  He straddles High and Popular culture more extensively than almost any other author: he was a master of prose fiction and poetry, and the first great literary theorist in the U.S.; he invented the detective story and helped invent science fiction; he anticipated Freud’s discovery of the unconscious; he paved the way for the Saw franchise; he was worshipped by Charles Baudelaire and celebrated by The Simpsons; hundreds of movies have been inspired by his tales; he has been probed by theorists including Jacques Lacan, Jacques Derrida, Barbara Johnson, and Stanley Cavell; and composers from Claude Debussy and Leonard Bernstein to Lou Reed and MC Lars have put Poe’s words to music.

In this course we will intensively study Poe’s own writings, alongside of which we will explore his extraordinary influence on the entire range of cultural production in the U.S. and around the world, from the early 19th century to the present day.  Course requirements will include quizzes, an in-class presentation, a very short essay, and a mid-length essay.