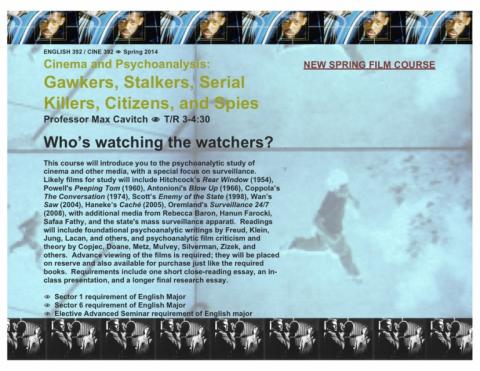 This course will introduce you to the psychoanalytic study of cinema and other media, with a special focus on surveillance. Likely films for study will include Hitchcock’s Rear Window (1954), Powell's Peeping Tom (1960), Antonioni's Blow Up (1966), Coppola’s The Conversation (1974), Scott’s Enemy of the State (1998), Wan’s Saw (2004), Haneke’s Caché (2005), and Oremland's Surveillance 24/7 (2008), and we will work our way around to recent revelations of the state's mass surveillance apparati. Readings will include foundational psychoanalytic writings by Freud, Klein, Jung, Lacan, and others, and psychoanalytic film criticism and theory by Copjec, Doane, Metz, Mulvey, Silverman, Zizek, and others. Advance viewing of the films is required; they will be placed on reserve and also available for purchase just like the required books. Requirements include one short close-reading essay, an in-class presentation, and a longer final research essay.