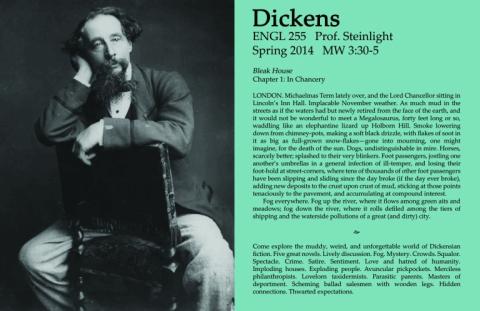 From his early career as a freelance journalist to his enduring celebrity as the most beloved Victorian novelist, Charles Dickens was and is a unique literary phenomenon. He invented, almost by accident, the serial novel (a precursor to contemporary TV drama series) and spawned an international mass audience of novel readers. He made London a character in its own right, and his tales of life and death in the modern metropolis define a new way of looking at the city. His fictional worlds are volatile, expansive, and complex: thronged with eccentric characters, buzzing with vitality and movement, but also riddled with perplexity and, often, burning with outrage at the social injustices of his time. Dickens can be a fierce satirist and a sentimentalist, a gritty realist and a devotee of the fantastical and bizarre, a radical critic of institutions and, as George Orwell once put it, "a national institution himself." His fiction not only has its finger on the pulse of nineteenth-century London; it also speaks to us in our own time, urging us to consider what kinds of stories we tell ourselves about our lives, what we choose to believe about the nature of success and failure, about money, property, and power, about crime and transgression, and about the limits of the communities to which we belong. This course will explore the Dickensian world through readings of five major novels: Oliver Twist, David Copperfield, Bleak House, Great Expectations, and Our Mutual Friend. We will place these novels in their historical contexts while assessing their distinctive aesthetic qualities, their narrative structures, and their lasting imaginative impact. Course requirements include participation in discussions, a 4-6pp essay, an in-class presentation, and a final research paper.