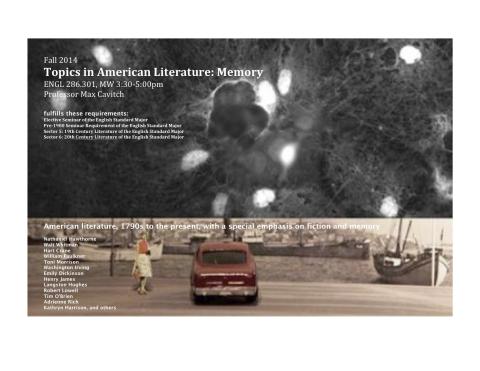 This course will introduce you to a wide range of American literature from the 1790s to the present, including 19th-century classics such as Nathaniel Hawthorne's The Scarlet Letter and Walt Whitman's Leaves of Grass, and 20th-century masterpieces like Hart Crane's The Bridge, William Faulkner's Absalom, Absalom!, and Toni Morrison's Beloved.  Other authors will include the likes of Washington Irving, Emily Dickinson, Henry James, Langston Hughes, Robert Lowell, Tim O'Brien, Adrienne Rich, and Kathryn Harrison.  While enjoying these authors' tremendous diversity of style and subject matter, we'll be paying special attention to the relation between fiction and memory--a relation at the heart of American traditions of storytelling.