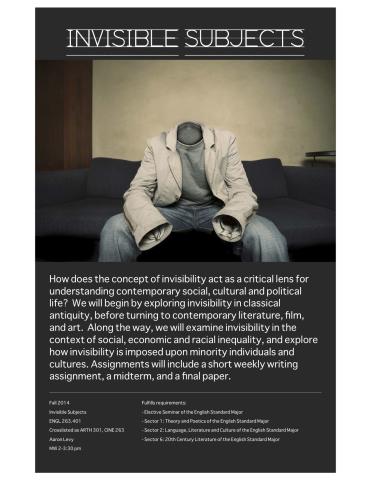 How does the concept of invisibility act as a critical lens for understanding contemporary social, cultural and political life?  We will begin by exploring invisibility in classical antiquity and through the moral questions posed in works such as Plato's Republic. Then, we'll examine invisibility in the context of social and economic inequality through the work of scholars such as Philippe Bourgeois and Elijah Anderson, before turning to science fiction, film, and art. These will range from works like H.G. Wells’ novella The Invisible Man to the art of David Stephens, a blind artist based in Philadelphia who will visit our class. Along the way, we will explore the feeling and status of racial invisibility in society in the work of novelists and social critics such as Ralph Ellison, James Baldwin, and Anne Anlin Cheng, who writer powerfully about how invisibility is imposed upon minority individuals and cultures. Theorists such as Edward Said and Arielle Azoulay, and performance artists such as DAM, will further enrich this seminar. Assignments will include a one-page weekly writing assignment, a midterm, and a final paper.