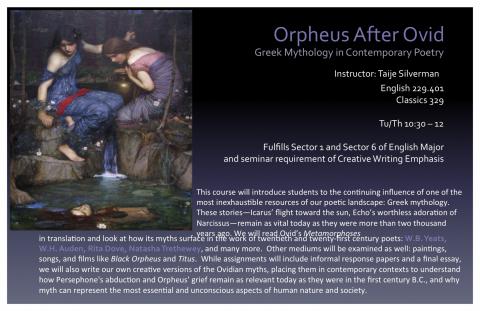 This course will introduce students to the continuing influence of one of the most inexhaustible resources of our poetic landscape: Greek mythology. These stories—Icarus’ flight toward the sun, Echo’s worthless adoration of Narcissus—remain as vital today as they were more than two thousand years ago.  We will read Ovid's Metamorphoses in translation and look at how its myths surface in the work of twentieth and twenty-first century poets: W.B. Yeats, W.H. Auden, Rita Dove, Natasha Trethewey, and many more.  Other mediums will be examined as well: paintings, songs, and films like Black Orpheus and Titus.  While assignments will include informal response papers and a final essay, we will also write our own creative versions of the Ovidian myths, placing them in contemporary contexts to understand how Persephone's abduction and Orpheus' grief remain as relevant today as they were in the first century B.C., and why myth can represent the most essential and unconscious aspects of human nature and society.