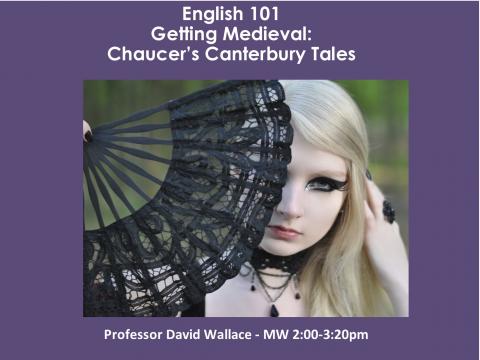 Chaucer is the most original and versatile poet ever. His English is endlessly plastic and adaptable, and he covers an amazing range of genres: from knightly epic to lowlife farce; from noble gestures to poking bums [asses] from windows; from saint’s life to barnyard romp; from orientalist fantasy to animal fable. Crucial issues of the day, such as representations of Islam and Judaism, and of sex and commerce, are addressed, plus scientific problem solving (for profit): how to turn base metal into gold; how to measure and model the acoustic properties of a fart. Can pagans be saved? Can a woman defy her husband or father and live? Can chickens talk?

Chaucer’s problem is that he died more than 600 years ago; his language is thus thought difficult, too far beyond our own experience. But his language forms the linguistic crust upon which we walk and talk every day: he wrote while English was first forming itself from diverse Germanic, Norse, Celtic, French, and Latin influences. To read Chaucer is to understand why English has both Holy Spirit and Holy Ghost; both normal">fraternity and brotherhood; both pig and normal">pork and cow and beef. It is also to grasp that the brilliant originality of Chaucer cannot be captured by any other poet, ancient or modern: for only Chaucer writes without expectations, without the weight of established poetic tradition, aka the literary canon, pressing down on his shoulders. So it is not surprising that very many poets, from Shakespeare to Sylvia Plath, find him inspiring. And modern artists find Chaucer liberating too: we’ll consider new poetry by Caroline Bergvall (who will visit class), Patience Agbabi’s “remix” of Chaucer, and BBC film versions.

Studying Chaucer will be different from reading the thick brick of a Victorian novel. Reading assignments will average little more than 500 lines per class; students with good study habits, not necessarily liberal arts majors, do well in this class. We move slowly, using editions that give excellent help with unfamiliar vocabulary. And we solve many problems in learning to read Chaucer aloud, as he intended: for Chaucer’s poetry is highly performative and persuasive, aiming to shape the thoughts and feelings of a readership that includes you.

First assessments in this class will be simple language tests and translation exercises, accompanying our deepening feel for the language. After that you can work more independently in writing essays, perhaps taking inspiration from the many modern poets, dramatists, and film-makers who have made Chaucerian language and idioms their own. You will leave class as an accomplished performer of medieval English, and with a deeper understanding of the language you use every day.