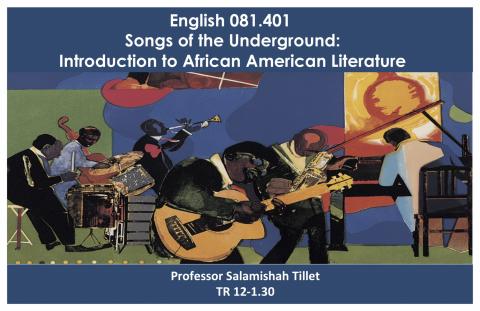 Songs of the Underground: Introduction of African American Literature

In 1979, a retrospective James Baldwin wrote "Music is our witness, and our ally. The beat is the confession which recognises, changes and conquers time." Here, Baldwin embodies an African American literary practice that values music as a space of self-fashioning, resistance and occasionally, racial transcendence.  In this course, we will examine the manner in which African American writers, such as Frederick Douglass, Zora Neale Hurston, Langston Hughes, Toni Morrison, and Paul Beatty, have turned to musical practices, from the sorrow songs to jazz, from European classical music to hip hop, as an aesthetic blueprint and political alternative.  We will also read music history and criticism in order to examine the tensions and slippages between these literary representations of music and the actual histories of African-American musicians and challenges posed for black musical production.