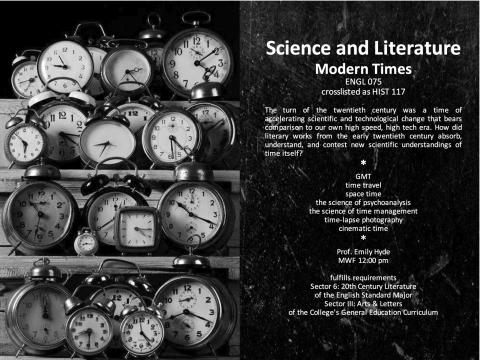 The turn of the twentieth century was a time of accelerating scientific and technological change that bears comparison to our own high speed, high tech era. How did literary works from the early twentieth century absorb, understand, and contest new scientific understandings of time itself? Reading major works of modern fiction, poetry, and film as well as to scientific texts from the period, we will learn to test our own readings against contemporary work at the intersection of science and literature through a series of three short writing assignments designed with science majors in mind. We will cover GMT, space time and time travel, the science of psychoanalysis and the science of time management, time-lapse photography and cinematic time. Throughout, we will be concerned both with the complicated temporality of modern life and with the challenge of bringing the fields of science and literature together. In lieu of a final, there will be a longer comparative final paper.