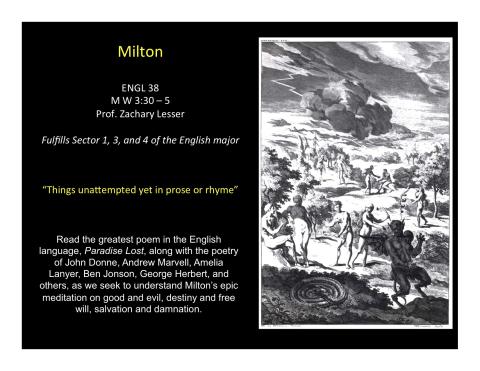 The seventeenth century was a period of unparalleled literary achievement and political transformation in England. The century began with the death of Queen Elizabeth and the accession of a Scottish king to the English throne, and included a massive religious war on the Continent; civil war in England; the execution of the king and the institution of republican government; radical religious experimentation; transformations in sexual, gender, and familial politics; and a second revolution that produced another “foreign” English king. It also produced the greatest poem in the English language, John Milton's Paradise Lost. In this course, we will read Milton's epic poem, as well as his sequel Paradise Regained and his play Samson Agonistes, alongside some of his sonnets and prose. We will also place Milton in his poetic context by reading work by John Donne, Ben Jonson, Aemilia Lanyer, George Herbert, Robert Herrick, Andrew Marvell, and others. Our focus throughout will be on the relation of this poetry to the questions of national, religious, political, and patriarchal sovereignty that dominated the era. Requirements will likely include a midterm and a final exam, and two short papers