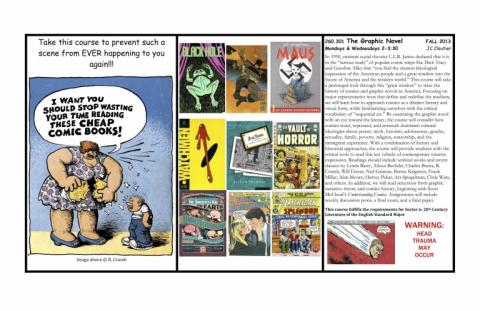 In 1950, eminent social theorist C.L.R. James declared that it is in the “serious study” of popular comic strips like Dick Tracy and Gasoline Alley that “you find the clearest ideological expression of the American people and a great window into the future of America and the modern world.” This course will take a prolonged look through this “great window” to trace the history of comics and graphic novels in America. Focusing on major representative texts that define and redefine the medium, we will learn how to approach comics as a distinct literary and visual form, while familiarizing ourselves with the critical vocabulary of “sequential art.” By examining the graphic novel with an eye toward the literary, the course will explore the ways it deploys conventional literary forms such as allegory, epic, character, setting, and extended metaphor. We will consider how comics resist, represent, and entrench dominant cultural ideologies about power, myth, heroism, humor, adolescence, gender, sexuality, family, poverty, religion, censorship, and the immigrant experience. With a combination of literary and historical approaches, the course will provide students with the critical tools to read this key vehicle of contemporary creative expression. Readings should include seminal works by Lynda Barry, Alison Bechdel, Charles Burns, R. Crumb, Will Eisner, Jack Kirby, Bernie Krigstein, Frank Miller, Alan Moore, Harvey Pekar, Joe Sacco, Art Spiegelman, Chris Ware, and others. In addition, we will read selections from graphic narrative theory and comics history, beginning with Scott McCloud’s Understanding Comics. We may also hold one of our sessions in Van Pelt’s rare book and manuscript library to sample some of their unique comics holdings. Assignments will include weekly discussion posts, a midterm exam, and a final paper.