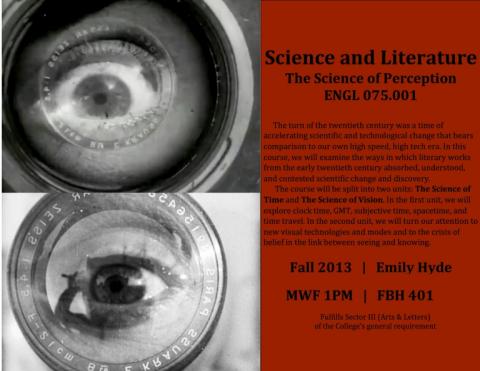 Science and Literature: The Science of Perception

The turn of the twentieth century was a time of accelerating scientific and technological change that bears comparison to our own high speed, high tech era. In this course, we will examine the ways in which literary works from the early twentieth century absorbed, understood, and contested scientific change and discovery. The course will be split into two units: The Science of Time and the Science of Vision. In the first unit, we will engage with clock time, GMT, subjective time, space-time, and time travel. In the second unit, we will turn our attention to new visual technologies and modes, from photography and film to ethnography and documentary, and to the crisis of belief in the link between seeing and knowing. Authors, photographers, and filmmakers may include: Andre Bazin, Josephine Baker, Henri Bergson, Joseph Conrad, Albert Einstein, T.S. Eliot, Robert Flaherty, John Grierson, Wyndham Lewis, Edward Steichen, H.G. Wells, Virginia Woolf.