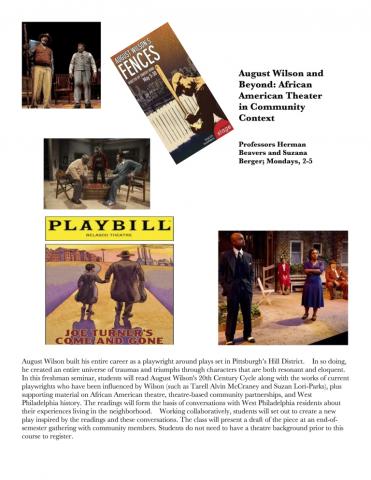 August Wilson built his entire career as a playwright around plays set in Pittsburgh’s Hill District.    In so doing, he created an entire universe of traumas and triumphs
through characters that are both resonant and eloquent. In this freshman seminar, students will read August Wilson's 20th Century Cycle along with the works of current
playwrights who have been influenced by Wilson (such as Tarell Alvin McCraney and Suzan Lori-Parks), plus supporting material on African American theatre, theatre-based community partnerships, and West Philadelphia history. The readings will form the basis of conversations with West Philadelphia residents about their experiences living in the neighborhood.    Working collaboratively, students will set out to create a new play inspired by the readings and these conversations. The class will present a draft of the piece at an end-of-semester gathering with community members. Students do not need to have a theatre background prior to this course to register.