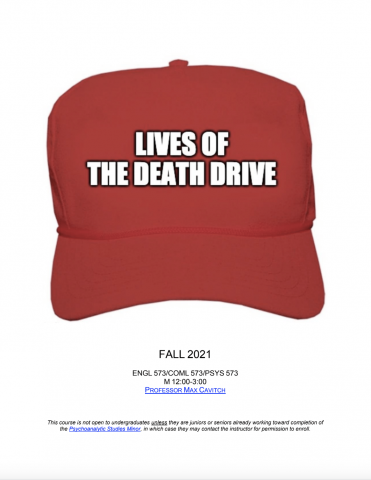 Lives of the Death Drive

Aggression is a fact of life—but where does it come from? Why are human lives so mired in violent thoughts and behaviors, including those we direct at ourselves? Why is human history a chronicle of death-dealing? Is aggression inevitable? Is it desirable? What sorts of relations obtain between creativity and destructiveness? This seminar addresses these questions by tracing the concept of the “death-drive” in psychoanalytic and critical theory, from its earliest incarnations in works by Sabina Spielrein, Sigmund Freud, Sándor Ferenczi, and Melanie Klein to its subsequent “lives” in works by Jacques Lacan, Frantz Fanon, Jean Laplanche, Luce Irigaray, Gilles Deleuze, Jacques Derrida, Paul de Man, Julia Kristeva, Slavoj Žižek, Eve Sedgwick, Judith Butler, Esther Sánchez-Pardo, Leo Bersani, Lee Edelman, Achille Mbembe, Benjamin Fong, and Ranjana Khanna. We’ll reflect on the place of aggression in our own experience, as well as in the records of others’ experiences—specifically, in autobiographical, autothanatographical, and autotheoretical writings by some of these same theorists, and also by other writers such as Simone de Beauvoir, Margery Kempe, Michel Leiris, Clarice Lispector, Michel de Montaigne, Maggie Nelson, Friedrich Nietzsche, Greta Thunberg, Harriet Wilson, and David Wojnarowicz.

Seminar members will each write an autotheoretical essay (approx. 30-40 pages), developed and workshopped in stages, as the semester proceeds, to be submitted in its final form after classes end, in December.

This course is not open to undergraduates unless they are juniors or seniors already working toward completion of the Psychoanalytic Studies Minor, in which case they may contact the instructor for permission to enroll.

Students who would like to get a head-start, in advance of the first class-meeting, could begin by reading (or re-reading) Freud’s short book, Beyond the Pleasure Principle (1920).