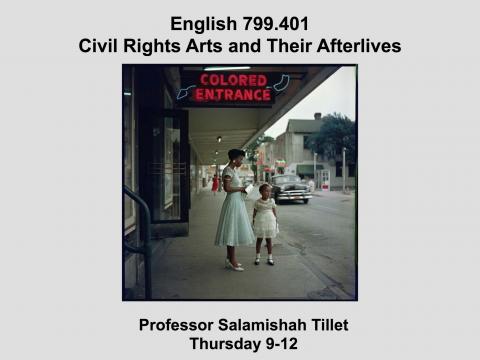 Civil Rights Art and Its Afterlife

In 1963, James Baldwin wrote, “the future is going to be worse than the past if we do not let the people who represent us know that it is our country.”  Hoping to appeal to legislators and readers alike, Baldwin’s essay, “We Can Change the Country” captured the insurgent spirit and democratic sensibility that defined the Civil Rights era. While the Civil Rights Movement is remembered as the one of the most significant events in twentieth-century American political and social history, it is rarely regarded, however, as a turning point in American art and culture.  Unlike the Black Arts Movement that fashioned itself as the cultural arm to the Black Power Movement, the idea of a civil rights aesthetics that emerged alongside formal Civil Rights politics has only recently become the subject of academic inquiry.  This interdisciplinary course study the emergence of a civil right aesthetic as produced by writers James Baldwin, Frank London Brown, Lorraine Hansberry; musicians like the Association for the Advancement of Creative Musicians, Max Roach, Curtis Mayfield, Nina Simone; actors Harry Belafonte, Diahann Carroll, Abbey Lincoln, and Sidney Poiter; and visual artists and groups such AFRICOBRA, Spiral, Sam Gilliam, Gordon Parks, and Faith Ringold.  The goal of this class is also to move past the single artist model to think about how collaboration as artistic practice and political ideal in collectives, friendships, and co-authorship also contributed to Civil Rights aesthetics.  Finally, we will examine the afterlife of this civil aesthetic and how recent retrospectives on these artists, such as the Brooklyn Museum’s exhibit “Witness: Art and Civil Rights in the Sixties,” John Legend and The Root’s cover album, "Wake Up!," Charles Johnson’s novel, "The Dreamer" and Rita Dove’s poetry collection, "On the Bus With Rosa Parks."