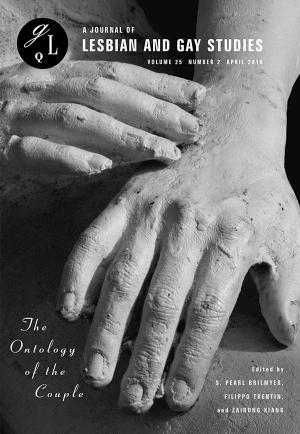 The Ontology of the Couple

Special issue of GLQ: A Journal of Lesbian and Gay Studies. Co-edited with Filippo Trentin and Ziarong Xiang.

Can one be queer and coupled? Or is the duality that defines the couple form fundamentally at odds with queer existence? In 1998 Lauren Berlant and Michael Warner wrote that “making a queer world has required the development of kinds of intimacy that bear no necessary relation to domestic space, to kinship, to the couple form, to property and to the nation. Since then, however, we have witnessed the couple form become the major vehicle through which gays and lesbians have achieved access to cultural and legal institutions as well as broader social acceptance. While before the late twentieth century, same-sex relations circulated largely outside what Michel Foucault called the “monogamic and conjugal cell,” today many such peripheral sexualities have been absorbed under the couple’s ever-expanding jurisdiction. Does the present moment require a more honest reckoning with the increasingly central role of the couple in queer life? Or do we need, now more than ever, to revitalize our commitment to the production of a sexual politics that would resist the ideology of the couple?