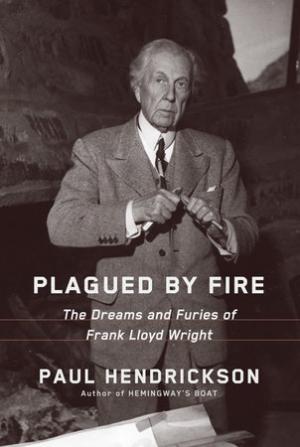 The Dreams and Furies of Frank Lloyd Wright

From the award-winning and nationally best-selling author of Hemingway’s Boat and Sons of Mississippi–an illuminating, pathbreaking biography that will change the way we understand the life, mind, and work of the premier American architect.

Frank Lloyd Wright has long been known as a rank egotist who held in contempt almost everything aside from his own genius. Harder to detect, but no less real, is a Wright who fully understood, and suffered from, the choices he made. This is the Wright whom Paul Hendrickson reveals in this masterful biography: the Wright who was haunted by his father, about whom he told the greatest lie of his life. And this, we see, is the Wright of many other neglected aspects of his story: his close, and perhaps romantic, relationship with friend and early mentor Cecil Corwin; the eerie, unmistakable role of fires in his life; the connection between the Tulsa Race Riot of 1921 and the murder of his mistress, her two children, and four others at his beloved Wisconsin home by a black servant gone mad. In showing us Wright’s facades along with their cracks, Hendrickson helps us form a fresh, deep, and more human understanding of the man. With prodigious research, unique vision, and his ability to make sense of a life in ways at once unexpected, poetic, and undeniably brilliant, he has given us the defining book on Wright.

“Paul Hendrickson has a voice. He hasn’t written a line that lies flat on the page; his every sentence crinkles and burns with intelligence. In Plagued by Fire, he transmutes the story of America’s greatest architect into something unexpected and immediate—a life inscribed by race, fire, murder, and loss, all inseparable from creative brilliance. Like Hendrickson himself, this book is indispensable.” —T. J. Stiles, two-time winner of the Pulitzer Prize

“Opening Paul Hendrickson’s Plagued by Fire: The Dreams and Furies of Frank Lloyd Wright is a bit like first encountering Faulkner. You enter a lapidary universe: multi-layered, multi-dimensional, linear and circular, often at the same time. Time? Hendrickson zooms around the narrative in a brilliantly literary time machine, strategically reminding the reader where she’s been, where she’s going and where she’s going back again. He builds no less than a Wrightian structure with words, filled with light and air, porous to the world outside, exquisitely finished and furnished. Coming after so many biographies of Wright, Hendrickson’s aim is to discover and reveal the complicated, deeply hidden goodness of the man. Like all great biographers, he knows and shows that any such quest arrives at an elusive, human mystery.” —Kate Buford, author of Burt Lancaster: An American Life

“Paul Hendrickson has managed to take the life of one of the most complex and difficult of American artists and restore some measure of human-ness to him in this riveting work.” —Ken Burns

“This is a biography worthy of the complexity of America’s iconic 20th Century architect. It describes Wright’s facade and flaws, but then reaches down to the deep emotional underpinnings of his brilliant but at times difficult personality. By understanding the turmoil of his life, Hendrickson makes Wright more sympathetic.” —Walter Isaacson, author of Leonardo Da Vinci

“In his fascinating Hemingway’s Boat, Paul Hendrickson accomplished the miracle of making us see Hemingway afresh, and now does the same for Frank Lloyd Wright. A first-rate reporter and storyteller, Hendrickson not only explains Wright’s architecture in terms any layman can appreciate, but also connects that monolithic achievement with a living, breathing human being—an egomaniac and huckster, yes, but also a haunted, touching man who never, never gave up. Quite simply, you don’t know the whole story until you read this book.” —Blake Bailey, author of Cheever: A Life