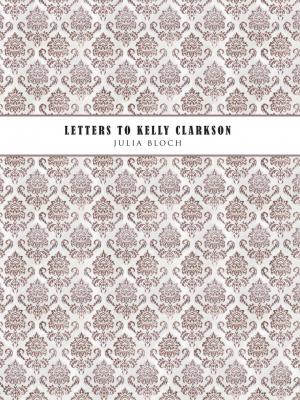 “As Julia Bloch turns her razor-sharp gaze to American Idol winner Kelly Clarkson, she adopts the beseeching tone of a fan and the intimate address of a best girl confidante. All women know what it’s like to be watched, but for Kelly, it’s that scary feeling upped a notch, like the viewers’ eyes have been pumped full of steroids. The gaze works both ways: the ghost of Kelly Clarkson follows Bloch everywhere, from San Francisco girl bars to Midwestern family reunions. For all their complexity of diction, there’s a touching simplicity to Bloch’s poems. By taking Kelly seriously, on her own terms, Bloch moves beyond the safety of ‘camp’ into a realm of genuine tragedy and love. It’s a stunning collection.” — Dodie Bellamy

“It may seem like froufrou to those of you who never loved a star, but actually the deepest parts of ourselves, and the ugliest parts of our social spaces, is what is invested in such poetry. Bloch is an amazing young writer who could do just about anything, but she decided to write a cockeyed masterpiece instead.” — Kevin Killian

“The letters posit Clarkson as container in which a multitude of cultural neuroses about femininity, desire, and the characteristics of reality fit, leaving readers feeling anxious about their own complicity in a system which venerates Clarkson’s emptiness.” — Sarah Burghauser, Lambda Literary

“In this book, ‘the battle isn’t outside’; rather, it is about the internal lives of women — and one woman in particular — struggling with the confines of ‘femininity’s dystopic embrace.’ While the narrator, Clarkson, and the book’s other women are constantly renegotiating their connections with (and disconnections from) one another and the world at large, their toughest struggles, Bloch implies, are within themselves.” — Chris McCreary, The Volta

“Bloch’s poems borrows text from a variety of sources — Wordsworth’s Prelude, Stoker’s Dracula, Slovenian philosopher Slavoj Žižek's paper on The Matrix. This expands the scope of the book beyond the obvious questions of celebrity, and puts it in conversation with other works of poetry, fiction, politics, and philosophy. It is a testament to craft that Bloch weaves these multiple conversations seamlessly into a singular, intimate conversation with the first American Idol.” — Rachel Mangini, Bookslut

“And like other collections that follow a similar form (e.g. Spicer’s After Lorca or Wenderoth’s Letters to Wendy's), direct address to a cultural figure or entity infuses the book with a certain amount of levity. But the humor inherent in this imagined correspondence does not negate the more serious theoretical concerns of the book.” — Joshua Ware

“The blips divulged in Letters to Kelly Clarkson by Julia Bloch could almost make a reader blush with how personal and, at times, crushingly earnest they are.” — Charlotte Seley, Rediver

“Most often, Bloch ties her prose poems to Kelly as a means of leading readers through the ways in which our daily processes somehow reflect the popular media of the day. The poems that are about Clarkson, however, are some of the most beautiful.” —Andy Emitt, SPIN, “Celebrating Pop Poetics: 25 Poets Who Draw Inspiration From Music Icons”