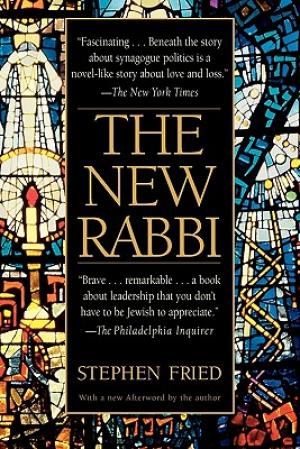 From award-winning journalist Stephen Fried comes a vividly intimate portrait of American Judaism today in which faith, family, and community are explored through the dramatic life of a landmark congregation as it seeks to replace its legendary retiring rabbi—and reinvent itself for the next generation.

The center of this compelling chronicle is Har Zion Temple on Philadelphia’s Main Line, which for the last seventy-five years has been one of the largest and most influential congregations in America. For thirty years Rabbi Gerald Wolpe has been its spiritual leader, a brilliant sermonizer of wide renown–but now he has announced his retirement. It is the start of a remarkable nationwide search process largely unknown to the lay world–and of much more. For at this dramatic moment Wolpe agrees to give extraordinary access to Fried, inviting him–and the reader—into the intense personal and professional life of the clergy and the complex behind-the-scenes life of a major Conservative congregation.

These riveting pages bring us a unique view of Judaism in practice: from Har Zion’s strong-willed leaders and influential families to the young bar and bat mitzvahs just beginning their Jewish lives; from the three-days-a-year synagogue goers to the hard core of devout attendees. We are touched by their times of joy and times of grief, intrigued by congregational politics, moved by the search for faith. We witness the conflicts between generations about issues of belief, observance, and the pressures of secular life. We meet Wolpe’s vigorous-minded ailing wife and his sons, one of whom has become a celebrity rabbi in Los Angeles. And we follow the author’s own moving search for meaning as he reconnects with the religion of his youth.

We also have a front-row seat at the usually clandestine process of choosing a new rabbi, as what was expected to be a simple one-year search for Rabbi Wolpe’s successor extends to two years and then three. Dozens of résumés are rejected, a parade of prospects come to interview, the chosen successor changes his mind at the last minute, and a confrontation erupts between the synagogue and the New York–based Conservative rabbis’ “union” that governs the process. As the time comes for Wolpe to depart, a venerated house of worship is being torn apart. And thrust onto the pulpit is Wolpe’s young assistant, Rabbi Jacob Herber, in his first job out of rabbinical school, facing the nearly impossible situation of taking over despite being technically ineligible for the position–and finding himself on trial with the congregation and at odds with his mentor.

Rich in anecdote and scenes of wonderful immediacy, this is a riveting book about the search for personal faith, about the tension between secular concerns and ancient tradition in affluent America, and about what Wolpe himself has called “the retail business of religion.” Stephen Fried brings all these elements to vivid life with the passion and energy of a superbly gifted storyteller.