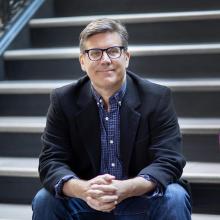 Professor Jed Esty on the radicalism and relevance of "The Waste Land" at 100, for OMNIA

See this coverage as it originally appeared on the OMNIA website: https://omnia.sas.upenn.edu/story/seven-things-know-about-waste-land-100

Seven Things to Know About "The Waste Land" at 100

Jed Esty, Vartan Gregorian Professor of English, on the radicalism and relevance of the T.S. Eliot poem.

April is the cruellest month, breeding
Lilacs out of the dead land, mixing
Memory and desire, stirring
Dull roots with spring rain.

“The Waste Land” by T.S. Eliot turned 100 this year. The poem was considered radical when it was published in the fall of 1922, following the first World War and a global pandemic, and was recently called “the most important poem of the 20th century” by Literary Hub. We asked Jed Esty, Vartan Gregorian Professor of English, what we should know about “The Waste Land” and its place in the culture after a century.

Esty specializes in 20th-century British, Irish, and postcolonial literatures, and also explores modernism, critical theory, and the history and theory of the novel. He’s been a fellow of the Guggenheim Foundation, the American Council of Learned Societies, and the National Endowment for the Humanities. His most recent book is The Future of Decline: Anglo-American Culture at its Limits. Here, Esty explains his seven things to know about “The Waste Land” today.

The great irony of this poem's life is that it's become a monument of Western civilization or modern poetry, but it was intended by Eliot as an anti-monument in a way. It's fractured and fragmentary. It's woven out of many sources, and there's an elaborate irony to the way he uses footnotes to explain his references. These footnotes—which he famously published along with the text,  a strikingly avant-garde thing to do in 1922—signal that the cultural center he’s trying to usher readers into is itself already entropic, losing its center.

When we think of a great monument, we think of it as containing and organizing information. Eliot was signaling that information is overloading the poem—that it can't be organized or contained. Every age has its own version of information overload. Eliot was one of the great poets for expressing in a single work the crack-up of the cultural and informational world he occupied.

“The Waste Land” is prescient in the way it samples culture. That’s understandable to today's students because everything comes to us in a jumble of excerpts, sampled and ripped out of context, then reassembled into new works. And if Eliot didn’t invent this collage or assemblage technique, he certainly crystallized it in 1922.

It's about trauma and collapse, both global and personal.

“The Waste Land” is a PTSD poem.  It’s not just about social and psychological damage after the Great  War, but also about vast scales of increasingly globalized illness: the influenza pandemic of 1918 anticipates the coronavirus pandemic now. The widespread sense of a culture navigating through traumatic shock to its systems also makes sense to today’s readers, especially younger ones. Disorganizing, fragmenting, and traumatizing experiences are being lived out at a global scale, and “The Waste Land” is a poem that tries to take in and comprehend that almost impossibly wide scale of disaster.

Yet at the same time, around 1921, Eliot was undergoing a breakdown in his own moral compass, in his emotions, in his intimate life. He found the poetic form that somehow manages to communicate to us intense personal distress and intense global distress through the same language, without collapsing the one into the other. It never feels like it's appropriation or mixed metaphor. It feels like it's connecting the dots of woundedness, of suffering and uncertainty at a social scale and at a private scale. T.S. Eliot, who was actually a fairly well-to-do and privileged person at the center of his civilization, is a victim of modernity, but he casts glances outward at other kinds of suffering, too.

It's very contemporary in terms of the world of sex and gender politics.

If we keep reading poems from 100 or 1,000 years ago, they mean something different with every passing year. The #MeToo era, for example, has brought to light is how centrally a kind of sex war features in the poem. And in the breakdown of contemporary sexual life, Eliot sees a long history of violence against women, all the way from classical literature to the mundane places where courtship rituals disintegrate and women—especially the new class of working women—are made vulnerable.

Megan Quigley, an Eliot critic at Villanova, has helped re-start a whole scholarly conversation on this topic in the last few years.

The scene I’m invoking here, from Part 3 of the poem, is represented by Eliot in a way that makes it seem like this kind of thing—men imposing themselves on women—is happening in 100 rooms in London on any given night.  The city is not just one big cataclysm of broken men—the maimed veterans, for example—but the scene of 1,000 little gender wars happening everywhere all at once.

Even more strikingly contemporary is the fact that this story is narrated from a transgender or inter-gender point of view. Eliot assumes the perspective of Tiresias, a famous mythological figure who transits back and forth between the positions of man and woman. Eliot uses the Tiresias viewpoint to try to embed the intimate skirmishes of his own tacky present into a whole civilizational struggle over sex, going back to Ovid and Greek tragedy.

It's truly a co-written poem.

We associate “The Waste Land” with Eliot, a poet once so famous that he filled football stadiums on his lecture tours.   But this is truly a co-written poem, and it draws attention to the collaborative role of even our most individualistic arts.

Ezra Pound performed drastic surgery on Eliot's drafts.  He made key excisions. And while Pound gets a certain amount of credit, it's always important to remind ourselves when we read “The Waste Land” that all art is collaborative, and, in a sense, all art is plagiarism and all writing is in the editing.

Eliot memorably ends the poem with a wonderful line of self-description: "These fragments I have shored against my ruins." And the implicit claim here is that the fragments of culture, the bricks, the rubble even, that you could pile up to form some bulwark against what feels like a rising tide of disorder and chaos, is the definition of literary achievement and artistic creativity. It's how you assemble pieces of the past that makes you an artist, not the telling a story that no one's ever told before.

Eliot could have been cast out of the curriculum.

This is a poet who could easily have been cast out of the curriculum because he's antisemitic, he's elitist, and he's pretty obviously sexist and racist. Yet he clings to the canon and the curriculum, not just because he gives us a chance to confront those forms of thinking, but also because the work was so radical and experimental.

I have a colleague, Jahan Ramazani at the University of Virginia, who writes about how Black poets in the Caribbean used “The Waste Land” to announce and develop their own poetic projects. The world that Eliot describes is a world that is falling apart, and it makes space for new people, and new peoples, and new poets, to enter into an account of their own modernization crises using some of the craft we see in Eliot’s pocket masterpiece.

The other amazing thing about the Waste Land centenary is that it's almost exactly to the year that England lost its mantle as the world’s greatest economy. London was the most powerful economic and cultural center in the world when Eliot was writing “The Waste Land” there. But by the early 1920s when the poem was published, America had already definitively eclipsed Britain as the largest economy in the world.

And as we read the poem now, we can feel the resonances about whether we are standing in an America that we can still save or that is tottering on the edge of its ruin, its epoch of decline.  It will turn out to be almost exactly 100 years that the U.S. has been the largest economy in the world, too.  In my book, The Future of Decline, I suggest that America can restore its national mission of democracy, but it has to let go of a bad romance that being American means always and forever occupying the center of the world.  “The Waste Land” is the great poem of civilizational decentering.

The whole civilization is speaking.

Eliot originally attached a phrase from Dickens to the poem, "He do the Police in different voices," which is a reference to a character in Dickens’s epic novel Our Mutual Friend who imitates what is effectively a 19th-century police blotter. It’s as if you were in your car scanning with a police radio and picking up fragments of stories, snippets of true crime. And you don't try too hard to figure out who's speaking because who's speaking is the whole civilization, understood as a battle between authority and freedom, order and disorder.

One of the things that happens when there's bombing and human displacement—as there was in WWI—and horrible suffering visited upon bodies and cities and landscapes is that everything is churned up. All of Western civilization was unearthed in Eliot's mind and in his eyes. And the rawness, the mental breakdown that he was experiencing in the years he put together “The Waste Land” was shaped in part because he was painfully sensitive to all that had been laid bare and exposed.

And that means that the sediments of civilization and culture are all thrown up like chunks into the present, undigested chunks of the past. So, it's all on the same plane now, where once it might have felt stratified and ordered. I think “The Waste Land” is a way of saying, “No, it's all with us, the bones, the ghosts, the fossils, the snatches of language.” And this is why he doesn't digest everything. It's not metabolized language and culture. It's all raw chunks and unbrushed artifacts coming right out of the archeological pit that is the city.  It’s a devastating history of Europe in the act of self-destruction.

“All poetry is in its ultimate sense meant to be listened to rather than read,” says Esty. Visit Penn Sound to hear “The Waste Land” read aloud.