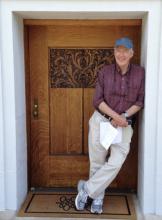 See this coverage as it originally appeared on the OMNIA website: https://omnia.sas.upenn.edu/story/moments-time

Philosophizing with a club bouncer, comparing wall decorations with the woman who occupied the same campus housing space 35 years prior—these are just a few of the epiphanic moments that grew out of Paul Hendrickson’s Advanced Writing Projects in Long-Form Nonfiction course. For Lily Stein, C’22, Alan Jinich, C’22, and their classmates, it wasn’t merely an academic experience, but a deeply personal one.

“If you’ve read The Secret History by Donna Tartt or watched Dead Poets Society, I’d say it’s a bit like that,” says Stein. “Our little class would meet once every two weeks over the dinner hour. Jazz or folk would be playing in the background, the five of us nestled into plush chairs in the faculty lounge of the English building. [Hendrickson] has a rare gift for finding beauty and significance in everything. What becomes quickly apparent in his class is that there is no difference between writing well and living well.”

Hendrickson, Senior Lecturer in the Department of English, is a veteran author and journalist. Before coming to Penn, where he received a Provost’s teaching award in 2005, Hendrickson worked as a staff feature writer at The Washington Post from 1977 to 2001. He is the author of numerous books, the most recent of which, Plagued by Fire: The Dreams and Furies of Frank Lloyd Wright, was published in 2019. He also authored the 2011 New York Times bestseller and National Book Critics Circle Award finalist Hemingway’s Boat: Everything He Loved in Life, and Lost, and in 2003, won the National Book Critics Circle Award for Sons of Mississippi: A Story of Race and Its Legacy.

“Experience in writing long-form nonfiction gives the student-writer, who might one day try to make a vocation of this work, a sense of how hard it is to do something long and sustained,” says Hendrickson. “It makes them morally and ethically accountable to their subjects—that is, they are not just swinging by for one or two interviews, but they are building up a relationship built on trust: their trust of the subject, the subject’s trust of them. Trust is always the implicit bargain, whether it is ever stated as such or not. For the student to come to terms with this in a long-form project pays dividends they don’t even realize at the time.”

Students engaged closely with Hendrickson on topics until they landed on one that really resonated.

“The professor and I were on the phone over winter break trying to brainstorm some ideas for a long-form project before the start of the semester,” says Jinich. “Initially I was thinking of just following one person around for the entire semester, but he seemed to be really excited by the idea of a tone poem, a sort of noir perspective of Penn after midnight. He sent me a link to ‘Round Midnight’ by Thelonious Monk and it set my mind loose.”

Arfaa, whose grandfather was once highly connected at Annenberg, used storytelling to create a portrait of the Annenberg Center for the Performing Arts.

Deveraux visited Penn Museum to study the complicated legacy of the photographic genius of Edward Curtis, the premier photographer and ethnologist of indigenous Americans in the early part of the 20th century. She examined archival prints and held in-depth interviews with the curator. Curtis’ photographs had a big impact on Deveraux’s mother, which made the project even more meaningful.

Mullins took a deep dive into the life and teaching career of Richard Polman, Maury Povich Writer in Residence in the Center for Creative Writing at Penn, whose class Mullins had earlier taken, and who is responsible for Mullins’s pivot toward a possible career in journalism.

Jinich’s ultimate piece, Penn After Midnight, saw him exploring nocturnal happenings around campus. “Would I follow the quiet moments of students walking home from Smoke’s? The Allegro delivery driver? Rodin security guard? How can I represent the living and breathing campus that never sleeps?”

Stein’s piece, The Immortal Life of the Green Monster, delved into the storied history of her housing at Penn, which she and her roommates have affectionately dubbed the “Green Monster.”

“I’ve always loved learning about history,” says Stein, “so hearing first-hand about what it was like to be 20 years old and a student at Penn in 1970, or imagining what it might have been like to raise a family under the Green Monster’s roof during the Great Depression was such an amazing and all-consuming experience.”

In the following pages, Stein and Jinich share some of the most powerful passages from their pieces, giving us a glimpse into their work process and literary journey.