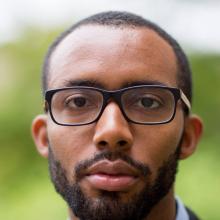 As the author selected from 16 finalists by judge Hilary Plum, Thomas receives $5,000 and will present a public lecture and reading at a celebratory event at a date to be determined as part of Chautauqua Institution’s online assembly season this summer. His writing will also appear in a future issue of the literary journal Chautauqua.

Hailing from Philadelphia, Thomas is a doctoral student in English at the University of Pennsylvania whose work has appeared or is forthcoming in The Offing, Gulf Coast and The Kenyon Review. Being an emerging writer, Thomas said, means “applying and submitting to hundreds of places where you feel the work might fit or be in conversation with other art you love and admire,” and he was surprised and honored for his work to be selected for the Janus Prize, “which thinks so deliberately about aesthetics and the social world simultaneously.”

Exploring loneliness, race, masculinity, violence and a search for happiness, “Reality Marble” is a memoir, drawing themes and its title from the natural world, and from the genres of fantasy and science fiction.

“There’s this almost incommunicable subjectivity in childhood that I’m trying to take seriously as a life of thinking in itself that’s very separate from me, rather than a stepping stone toward a better, more stoic and individuated self with an empathetic lure to gaze back on,” Thomas said. “‘Reality Marble,’ using the coming-of-age genre, tries to think about what it’s like to never quite get there, because I certainly never thought I would and plenty of us, every day, don’t.”

His central questions, Thomas said, “are about what happens if you’re just another nerdy black kid in a bad situation and not a single inspirational older figure, group or institution ever comes to save you — when more often, you’re expected to save them.”

Chautauqua Institution Director of Literary Arts Sony Ton-Aime said “Reality Marble” is “written in an inventive and audacious prose,” that reads “like a marriage of Jesmyn Ward’s writing and César Vallejo’s poetry.”

“He masterfully sketches a singular coming-of-age story of a young black man told through his relationship with his pet animals and his friends and family’s love or lack thereof,” Ton-Aime said. “Here is a young writer that is drawing from traditional storytelling and turning it on its head to create something daring, inventive and wholly entertaining.”

The work “perfectly fits the spirit of the Chautauqua Janus Prize,” Ton-Aime said, and he was grateful to Plum’s “percipience in choosing ‘Reality Marble’ as the winner for this year.”

“Our protagonist in this memoir is a child, Joey, in northeast Philadelphia. Thomas gives form to a brilliantly precise consciousness: hope, fury, fear, mystery, stubborn insistence, powerlessness, invention,” Plum said. “His prose miraculously recalls childhood’s deep ways of knowing. These sentences are dense with world and rhythmic with inciting imagination. It’s a great pleasure to celebrate Thomas’ work with the Chautauqua Janus Prize.”

Plum is the author of the novel Strawberry Fields, winner of the Fence Modern Prize in Prose (2018); the work of nonfiction Watchfires (2016), winner of the 2018 GLCA New Writers Award; and the novel They Dragged Them Through the Streets (2013). She is an associate college lecturer at Cleveland State University and in the NEOMFA program, and is associate director of the CSU Poetry Center. Plum will also be a Chautauqua Writers’ Center writer-in-residence during Week Six of the 2020 summer season, leading a prose workshop on “Bodies in language, bodies of language.”

First awarded in 2018, the Chautauqua Janus Prize celebrates one emerging writer’s single work of short fiction or nonfiction for daring formal and aesthetic innovations that upset and reorder literary conventions, historical narratives and readers’ imaginations. Named for Janus, the Roman god who looks to both the past and the future, the prize honors writing with a command of craft that renovates our understandings of both. The prize is funded by a generous donation from Barbara and Twig Branch.

Details on the Chautauqua Janus Prize are available online at chq.org/janus.