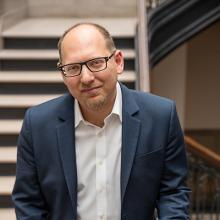 Professor Decherney discusses his latest book, "Hollywood: A Very Short Introduction," which "addresses everything from the progression of the studio system to the darker periods of Hollywood, such as the blacklist during the Cold War," describes his upcoming MOOC (massive open online course) on the history of Hollywood, and tells the story of how he went from being a film scholar to a filmmaker through his first film project, Filmmaking for Democracy in Myanmar. Read more here.