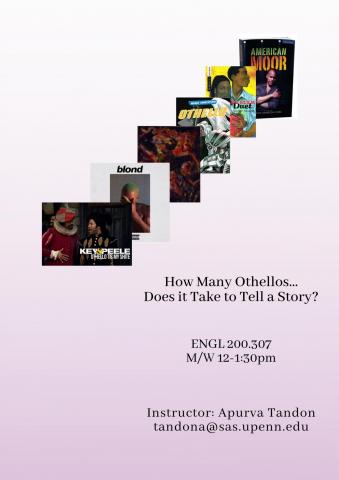 Junior Research Seminar: How Many Othellos...Does It Take to Tell a Story? cancelled

From a dropped handkerchief to an unraveled marriage to a pile of dead bodies, William Shakespeare’s Othello is quite a story. And sure enough, its title character anticipates its telling: “Speak of me as I am,” he implores. The telling of stories is a central theme in the play—and indeed, Othello’s story has been told, retold, adapted, and appropriated countless times and in countless genres. How, and by whom, has Othello been “spoken of” in popular culture from the 1500s to now? In this course we will examine various Othello narratives, from the version that inspired Shakespeare to the versions he inspired. In particular, we’ll investigate what stories of identity—race, gender, sexuality, class—Othello tells; how it has been used to tell and retell stories of identity since; and why it has remained such a popular choice to do so.

This is a Junior Research Seminar, designed to introduce students to a variety of critical research skills and academic writing methods. Possible assignments may include exercises in close reading and visual analysis, film reviews, and short presentations, culminating in a required final research project with critical and/or creative components. This course fulfills sectors 2 and 6 of the English Major Core.