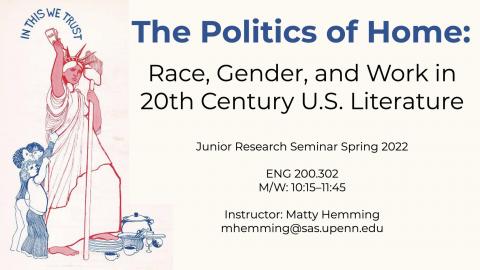 Junior Research Seminar: The Politics of Home: Race, Gender, and Work in 20th Century US Literature

“Invisible, repetitive, exhausting, unproductive, uncreative – these are the adjectives which most perfectly capture the nature of housework,” writes scholar and activist Angela Davis in Women, Race and Class (1981). This provocative statement challenges traditional understandings of the home as a space of safety, comfort, and fulfillment, raising questions which will animate this class: Whose labor is visible within a white supremacist and patriarchal understanding of the home? Which homes are considered as properly “domestic” in a US context? And what is the relationship between the home and notions of public vs private, family, and the nation? The class explores these questions by focusing on how the home emerges as a key site of political action for US-based writers and thinkers of the twentieth century. We will read literature spanning the period, looking to fiction that theorizes, politicizes and reclaims the space of the home. Texts may include Zitkala-Sa’s challenge to US settler colonial domestic norms in American Indian Stories (1921) and Alice Childress’s conversational portraits of a Black domestic worker in Like One of the Family (1956). We will consider social contexts such as the Wages for Housework movement, encounter canonical feminist texts such as The Feminine Mystique (1963), and read the work of theorists such as Sara Ahmed, Gloria Anzaldúa, Roderick Ferguson, and Silvia Federici.

As a Junior Research Seminar, this course aims to teach students the research skills needed to be careful and critical readers. Throughout the semester we will build strategies for closely analyzing primary and secondary texts. For the final project, students will have the opportunity to choose between a 10-15-page critical paper and a creative project.