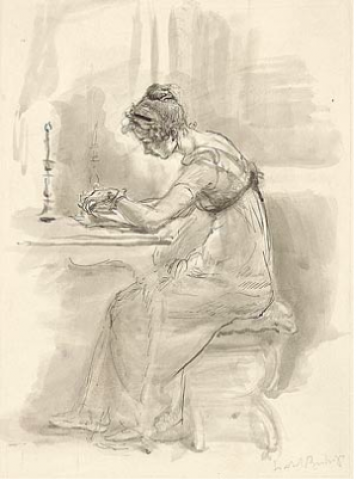 In a now famous letter to her nephew Edward, Jane Austen compares the power and worldliness of his masculine prose to her own more contained, feminine style. Answering a charge never made, that she might have purloined two missing chapters of Edward’s work, she asks, “What should I do with your strong, manly, spirited sketches, full of variety and glow? How could I possibly join them on to the little bit (two inches wide) of ivory on which I work with so fine a brush, as produces little effect after much labour?” Her query is at once self-deprecating and ironic; her ladylike prose, at once the precondition for her admittance into the canon and the target of nineteenth-century critics and reviewers, who somehow managed “to patronize Austen even as they grouped her with Shakespeare.” Scholars of Austen still inherit this early ambivalence. So subtle is her engagement with the politics of her day, so flexible and complex her responses to the “war of ideas” that raged in the wake of the French revolution, that we may well miss them altogether. And even those critics who have insisted on Austen’s political engagement, have tended to deploy familiar categories—conservative v. progressive, for instance—within which her work simply does not fit. This course will consider the many ways Austen has been characterized as a political thinker—a Tory, a moralist, a subversive, a feminist—as well as the ways she has been reframed in criticism and film both to serve and to critique a wide range of political ends.