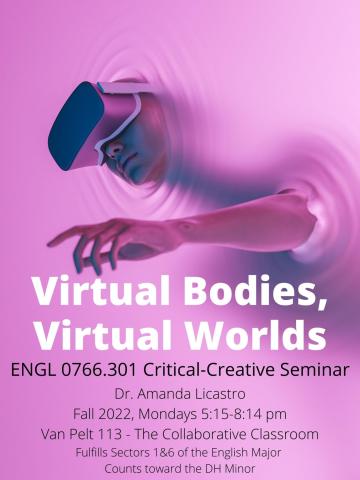 This is a critical and creative seminar in which we will read major literary works about virtual worlds while creatively interpreting those works using Extended Reality (XR) tools and methods. Is the divide between human and machine - virtual and reality - becoming harder to maintain? From the Golem of folk tales to Frankenstein and even Alexa, the concept of the semi-artificial person, or cyborg, is long-lived, appearing across popular, religious, and scientific imaginations. As technology becomes more personal, the cyborg becomes less alien, and the prospect of our own transformation into technologically enhanced organisms seems imminent. At the same time, we occupy and engage with spaces that are rendered electronically, and our experience of the world is mediated through digital technology. How do these technologies – such as video conferencing, social media networks, ARGs, and Extend Reality (XR) immersions – change the way we experience and construct narrative? In this course we will investigate posthumanism through a critical look at cybernetics and XR in our culture, examining representations in media such as literature, film, television, advertising, video games, and comics. Critiques will be framed through the lens of gender, race, and labor using the theory of scholars such as Judith Butler, Donna Haraway, and Lennard Davis. Readings will include fiction such as Marge Piercy’s He She, and It, E.M. Forster’s The Machine Stops, and Jennifer Haley’s The Nether which will be paired with films such as The Stepford Wives and shows such as “Black Mirror.” Students will also experience and critique examples of XR immersions inspired by works of literary fiction. With support from the library, including workshops in WIC, Vitale Media Lab, the Education Commons, and BioMed, students will conceive and produce hybrid creative-critical projects that remix the literature as an XR immersion. These projects will be collaborative, and include research, creative writing (narrative), storyboarding, and prototyping with XR tools. No previous knowledge of AR/VR or experience is necessary.

Class will meet in room 113 Van Pelt - The Collaborative Classroom.