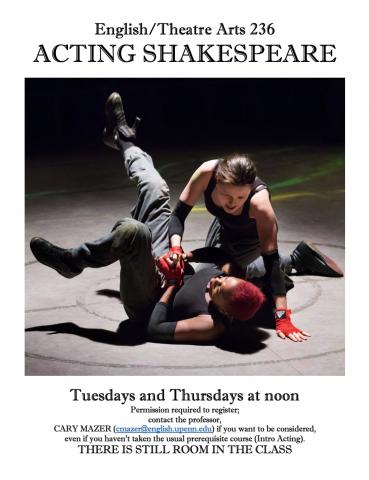 Prerequisites: Thar 120 or Thar 121 and Permission of the Instructor.

This is a hands-on studio course designed to empower actors (and directors, designers and dramaturgs) to use the structure of Shakespeare s language and the conventions of Shakespeare s stage to build performance, using the skills and method of the contemporary actor. After the class works collectively on sonnets and speeches, all of the speech- and scene-work will be drawn from a single Shakespeare play (to be determined), with two reciprocal goals: to use the script to build the performance, and to use what we discover through performance to build an interpretation of the script. NOTE: the normal prerequisite for this course is THAR 120 or THAR 121 or their equivalents; but exceptions will be made by permission of the instructor.