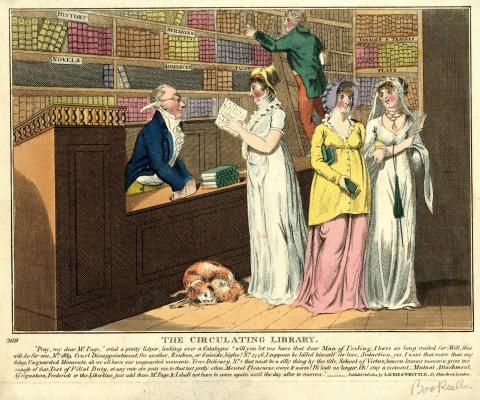 During the eighteenth century, earlier advancements in printing press technologies led to an explosion in literacy rates and new literary genres, including newspapers, dictionaries, and the novel. Theaters doubled in capacity, leading to newer forms––including operas, elaborate special effects, and pantomimes––that would appeal to larger audiences who were now further from the stage. In this class, we will look back to the eighteenth century to study earlier forms of ‘mass media’, in part to think about how they have shaped our own media environment. Over the course of the semester, we will ask: What is mass media? How has literary production been shaped by literature’s dissemination to and reception by larger audiences? How do our media environments (television, Instagram, TikTok) shape how we imagine our communities?

The semester will be broken up into units covering various forms of media and media events, including periodicals, engravings and other visual narrations, ‘found’ poetry, novels and the ensuing cultural panic over women reading them, the theater and the rise of celebrity, the beginning of "true crime" stories, and the Gothic craze. Students are in no way expected to become experts in each area—rather, these units will allow us to think about many different kinds of media forms and the many different ways in which they were played with, debated, and consumed by their eighteenth-century audiences. The class will involve visits to Kislak Special Collections and will likely include a visit to Common Press, Penn’s printing press. Texts will include Laurence Sterne's Tristram Shandy (1759), Daniel Defoe's Journal of a Plague Year (1722), Horace Walpole's The Castle of Otranto (1764), Henry Fielding's The Female Husband (1746), Samuel Richardson's Pamela; or, Virtue Rewarded (1740), and Law & Order: Special Virctims Unit.