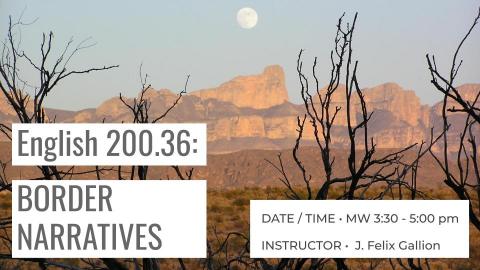 At a time when immigration, migration, and the labor of Latin American and Latinx migrants are at the fore of cultural and political debate, it is clear that ideas about borders are bound up in our current understandings of race, class, gender, and citizenship. Key to our understanding of borders and their imbrication with these larger concepts are narratives of lived experiences that take place at, on, and through U.S. borders. This course will examine 20th and 21st century border narratives to seriously consider what it means to live life “on the border,” both in terms of national boundaries and in terms of the borders that are socially constructed in our own communities. To explore the borderlands, we will consider the U.S.-Mexico border as a key site of “border life” while learning about the experiences of different types of migrants, including Chicanx migrant laborers. We will pay special attention to representations of borders and those who cross them, not only in the study of literature, but in other media, e.g. oral history, digital recordings and publications, films, television, podcasts, etc. to explore theories and experiences of borders and the complex systems of power that operate around them.

Taking a multimedia approach, students will engage with textual, visual, and sonic archives through a variety of digital tools that will help us rethink topics such as the visualization of space and migration and the importance of sound in constructing borders and border culture.

Likely texts include Gloria E. Anzalúa’s classic text Borderlands/La Frontera, Salvador Plascencia’s experimental The People of Paper, Tomás Rivera’s ...And the Earth Did Not Devour Him, Yuri Herrera’s mesmerizing Signs Preceding the End of the World, and China Miéville’s The City & the City, along with the films Selena (1997), Sleep Dealer (2008) and Who is Dayani Cristal? (2013).