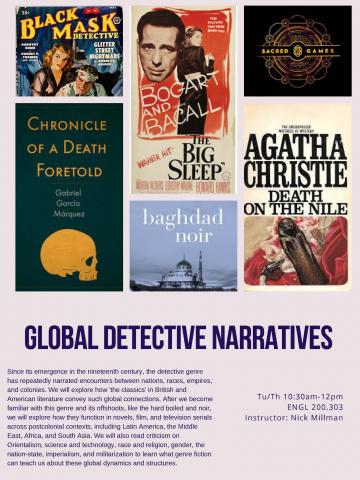 Detective fiction is one of the most popular and global genres of all time. Since its emergence in the nineteenth century, writers of this genre have repeatedly narrated encounters among nations, races, empires, and colonies. We begin this course exploring how the ‘classics’ in British and American literature convey these global connections, from Edgar Allan Poe’s “tales of ratiocination” (“The Murders in Rue Morgue”), to Arthur Conan Doyle’s novels about Sherlock Holmes’ trysts to recover lost Indian treasures (The Sign of Four), and to Agatha Christie’s stories in Egypt (Death on the Nile). After we become familiar with this genre and its offshoots, such as the hardboiled and noir, we will explore how they function in postcolonial contexts. We will work through a Latin American novella about reconstructing an unsolved murder (Gabriel García Márquez’s Chronicle of a Death Foretold), a Mexican film about disappearances in border towns (Traspatio), hardboiled novels about transnational crime across Africa and the U.S. (Mukoma Wa Ngugi’s Nairobi Heat), Iraqi short stories about the 2003 U.S. invasion (Baghdad Noir), a Netflix neo-noir serial about urban gangsterism in India (Sacred Games), and more. To refine our interpretations of these narratives, we will also read critical texts on Orientalism, science and technology, race and religion, gender, the nation-state, globalization, imperialism, and militarization. In doing so, we will aim to understand what genre fiction can teach us about these global dynamics and structures.

As this course is a Junior Research Seminar, students will hone a variety of research methods and complete several creative/critical written assignments. Possible assignments include a close reading exercise, a study of a keyword in the Oxford English Dictionary, a film shot analysis, and an opportunity to write about the Gotham Book Mart special collection in Van Pelt Library. Students are expected to complete a 10-15 page final research project or a creative/critical project developed in consultation with the instructor.