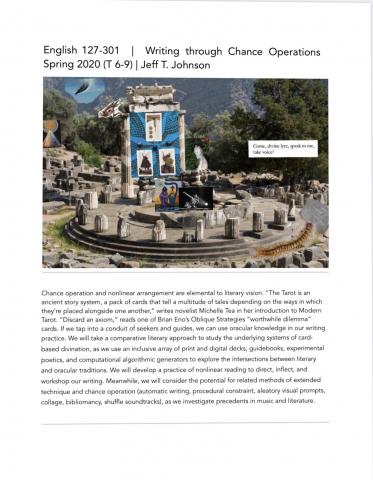 Chance operation and nonlinear arrangement are elemental to literary vision. “The Tarot is an ancient story system, a pack of cards that tell a multitude of tales depending on the ways in which they’re placed alongside one another,” writes novelist Michelle Tea in her introduction to Modern Tarot. “Discard an axiom,” reads one of Brian Eno’s Oblique Strategies “worthwhile dilemma” cards. If we tap into a conduit of seekers and guides, we can use oracular knowledge in our writing practice. Extended contemplation of the Fool’s Journey (as Tarot is known) in the context of chance operations and nonlinear reading/writing practice gives us archetypal imagery to work with, presents concrete ways to think about structure, sequence, form and format, and offers aleatory paths to link interpersonal and sociocultural transformation. We will take a comparative literary approach to study the underlying systems of card- based divination, as we use an inclusive array of print and digital decks, guidebooks, experimental poetics, and computational algorithmic generators to explore the intersections between literary and oracular traditions. Attention to the varied structure of these visionary and literary tools will give us analogs for the ways seeing and telling are formally indicated. We will develop a practice of nonlinear reading to direct, inflect, and workshop our writing. Meanwhile, we will consider the potential for related methods of extended technique and chance operation (automatic writing, procedural constraint, aleatory visual prompts, collage, bibliomancy, shuffle soundtracks), as we investigate precedents in music and literature. Course resources include: John Cage, Silence; Geeta Dayal, Another Green World; Rosmarie and Keith Waldrop, Keeping / the window open; Michelle Tea, Modern Tarot; Robert Grenier, Sentences; John Ashbery, Three Poems; Julio Cortázar, Hopscotch; Vi Khi Nao, Sheep Machine; readings on Oulipo; Bernadette Mayer’s Writing Experiments; and Charles Bernstein’s Experiments.