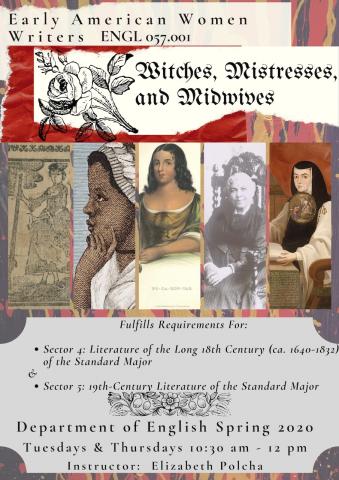 Did witches and herbalists of the colonial Americas write novels? What writings did Benjamin Franklin’s mistresses leave behind? What happens when Robinson Crusoe is reimagined as an Indigenous woman from colonial Virginia?

This course offers a deep-dive into the under recognized women writers of the colonial Americas, using critical frameworks of race, gender, and sexuality to bring the banished, the deviant, the incarcerated, and the erased into the canon of American literature. We will therefore read across genres of texts—both in and out of print—such as natural histories, testimonies, diaries, letters, epistolary novels, and visual and material culture. Our readings will also cover a vast timeline, from 17th century testimony of a Puritan who is investigated for her “monstrous birth” to queer aesthetics in 19th century print culture. More broadly, this course takes a nontraditional approach to the teaching of early American literature, asking students to consider how genres of writing, both private and public, shaped early nationalist and imperialist ideals of bodies, families, and sexual freedom in the so-called "New World.”

Class will be led in a discussion-based format, and will include two short papers and a group project requiring archival research. Additionally, as a class we will embark on a field trip to the American Philosophical Society for a feminist history tour of the upcoming “Benjamin Franklin and Science” exhibition.