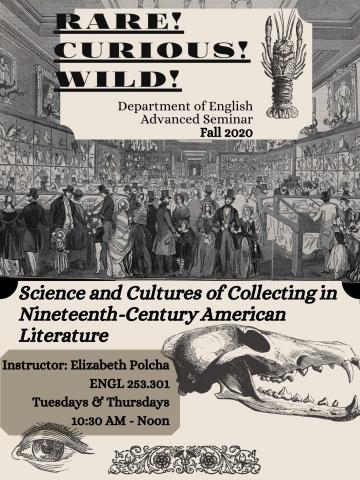 Rare, Curious, and Wild: Science and Cultures of Collecting

“I hate museums…they are the catacombs of nature” - Henry David Thoreau, 1837

What is a curiosity cabinet full of fossils to a literary scholar? If you are like Thoreau, you may believe that the “proper herbarium,” or museum, is the great outdoors. However, despite Thoreau’s hot take, museums and imperialist cultures of collecting undoubtedly shaped nineteenth-century American writing in fundamental ways.

This course explores how slavery, racial capitalism, settler colonialism, and imperialism defined scientific ideas of collection and display in the nineteenth century. As a class, we will study Philadelphia local archives and digitized objects and texts in order to understand how the mass excavating and collecting of global natural history informed American literature in the long nineteenth century. Further, we will also consider how nineteenth-century photography and cultures of mechanization transformed literary and visual concepts of scientific objectivity.

Across these investigations of narratives, prints, and specimens, we will consider questions such as: How can we understand racist science, ethnology, and taxonomy as literary concepts? What does Emily Dickinson’s herbarium, for example, tell us about race, gender, and colonialism in the nineteenth century? Whose knowledge was valued in the shaping of the American museum—and how did early museums depend on land theft and settler colonial ideologies of dispossession? How does racial capitalism help us understand the commodification of nature in American and transatlantic literature?