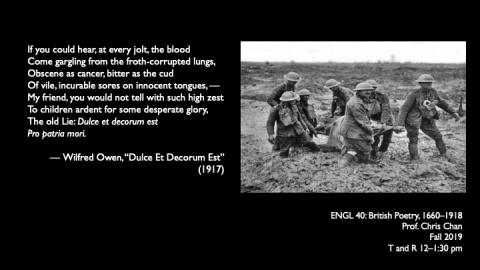 This course will introduce you to poems written primarily by British poets between the end of the Civil Wars (1660) and the end of the First World War (1918). During this period, poets of all backgrounds forged a veritable literary tradition which continues to shape Anglophone poetry and its interpretation today. We will analyze the rhetorical features of their craft, and we will pay particular attention to how poets understood their roles as contributors to, and occasional critics of, a rapidly developing British nation and empire. Beginning with a survey of popular poetic forms, we will then examine poetic engagements with aesthetics, authority, gender, labor, modernity, religion, and slavery across the centuries. Through readings, discussion, and regular assignments, we will reflect on the ever-changing relationship between poetic form and function, as well as the uses and misuses of poetic “convention” and “tradition.”