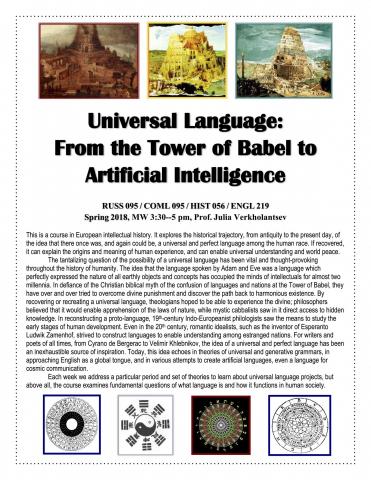 Universal Language: From the Tower of Babel to Artificial Intelligence

This is a course in European intellectual history. It explores the historical trajectory, from antiquity to the present day, of the idea that there once was, and again could be, a universal and perfect language among the human race. If recovered, it can explain the origins and meaning of human experience, and can enable universal understanding and world peace.

The tantalizing question of the possibility of a universal language have been vital and thought-provoking throughout the history of humanity. The idea that the language spoken by Adam and Eve was a language which perfectly expressed the nature of all earthly objects and concepts has occupied the minds of intellectuals for almost two millennia. In defiance of the Christian biblical myth of the confusion of languages and nations at the Tower of Babel, they have over and over tried to overcome divine punishment and discover the path back to harmonious existence. By recovering or recreating a universal language, theologians hoped to be able to experience the divine; philosophers believed that it would enable apprehension of the laws of nature, while mystic cabbalists saw in it direct access to hidden knowledge. In reconstructing a proto-language, 19th-century Indo-Europeanist philologists saw the means to study the early stages of human development. Even in the 20th century, romantic idealists, such as the inventor of Esperanto Ludwik Zamenhof, strived to construct languages to enable understanding among estranged nations. For writers and poets of all times, from Cyrano de Bergerac to Velimir Khlebnikov, the idea of a universal and perfect language has been an inexhaustible source of inspiration. Today, this idea echoes in theories of universal and generative grammars, in approaching English as a global tongue, and in various attempts to create artificial languages, even a language for cosmic communication.

Each week we address a particular period and set of theories to learn about universal language projects, but above all, the course examines fundamental questions of what language is and how it functions in human society.