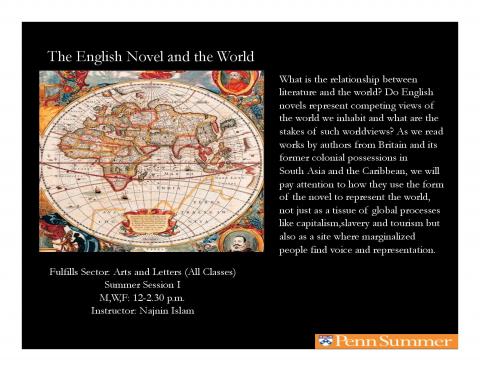 The English Novel and the World

The English Novel and the World

What is the relationship between literature and the world? Do English novels represent competing views of the world we inhabit and what are the stakes of such worldviews? In this course we will explore these questions through a selection of works of fiction from Britain and its former colonial possessions worldwide.  Moving away from the conventional understanding of the English novel as invested only in marriage plots and insular country houses, we will ask questions such as, what might one of the earliest examples of the novel form like Aphra Behn’s Oroonoko tell us about Britain’s connection to the wider world and the human costs of imperial expansion? What might Jane Austen’s ostensibly domestic drama, Mansfield Park tell us about a world outside of polite British society, somewhere in the plantations of Antigua? As we read works by authors from Britain, South Asia and the Caribbean, we will pay attention to how they use the form of the novel to represent the world, not just as a tissue of global processes like capitalism, slavery and tourism but also as a site where marginalized people find voice and representation.

Readings for this course may include, Aphra Behn’s Oroonoko, Jane Austen’s Mansfield Park, Joseph Conrad’s Heart of Darkness, V.S. Naipaul’s A House for Mr. Biswas and Amitav Ghosh’s The Shadow Lines as well as films such as Patricia Rozema's 1999 adaptation of Austen's Mansfield Park and Richard Fung's 1990 documentary, My Mother's Place.