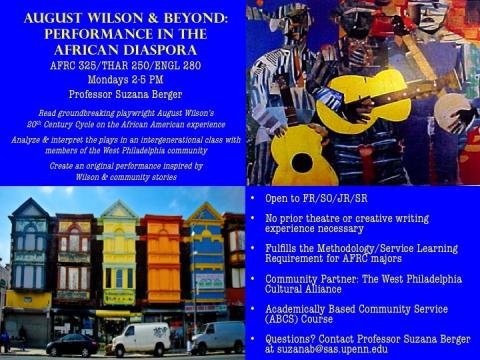 The purpose of this course is to engage students in the rigorous process of mining experiences for material that can be transformed into a public performance piece.  In-class writing, group discussions, and field work in the Philadelphia area.  Fall 2015 Topic: AUGUST WILSON - The people need to know the story.  See how they fit into it.  See what part they play. - August  Wilson, King Hedley II.  In this seminar, students will read groundbreaking playwright August Wilson's 20th Century Cycle: ten plays that form an iconic picture of African American traumas, triumphs, and traditions through the decades, told through the lens of Pittsburgh's Hill District neighborhood.  Other readings include supporting material on Wilson's work and African American theatre, the works of contemporary playwrights whom Wilson has influenced (such as Suzan-Lori Parks and Tarell Alvin McCraney), and context on Penn's relationship with West Philadelphia.