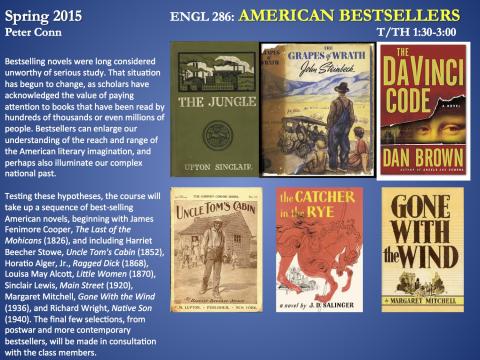 Bestselling novels were long considered unworthy of serious study. That situation has begun to change, as scholars have acknowledged the value of paying attention to books that have been read by hundreds of thousands or even millions of people. Bestsellers can enlarge our understanding of the reach and range of the American literary imagination, and perhaps also illuminate our complex national past.Testing these hypotheses, the course will take up a sequence of best-selling American novels, beginning with James Fenimore Cooper, The Last of the Mohicans (1826), and including Harriet Beecher Stowe, Uncle Tom's Cabin (1852), Horatio Alger, Jr., Ragged Dick (1868), Louisa May Alcott, Little Women (1870), Sinclair Lewis, Main Street (1920), Margaret Mitchell, Gone With the Wind (1936), and Richard Wright, Native Son (1940). The final few selections, from postwar and more contemporary bestsellers, will be made in consultation with the class members.Along with close examination of each text, we will also attempt to identify the connections between the novels and their social and political contexts. We will engage a number of questions in the course, including the difficulties in defining bestsellers, especially for novels published before the second half of the twentieth century; the venerable debate about popularity vs. quality; the role of marketing and publicity in the production of bestsellers; and the continuities and changes in American bestsellers over nearly two centuries.Course requirements will include a short paper, due about halfway through the course, an oral report on a bestseller of each student’s choice in the last two weeks of the course, and a longer final essay.