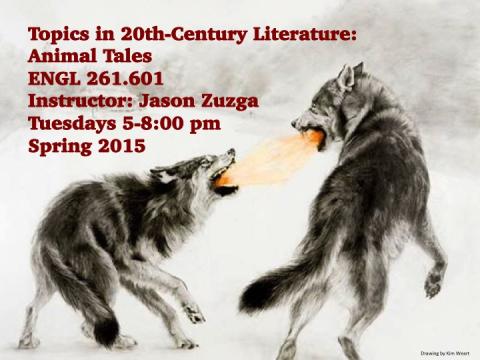 From Aesop to Kafka, why do we long to be able to share experiences with non-speaking animals? Or, rather, is such a impossibly negative framing a legacy since language began among the privileged humans as we've been chatting together all along?  We will interrogate a number of novels, stories, films, and cultural objects (Animal Planet's The Pet Psychic, Giorgio Agamben's The Open, etc.)  to see what might be the answers and the motivations to such questions themselves, from bee  dance to guide dogs. We will look at the tales of the Darwins (Erasmus and Charles), documentaries featuring “speaking animals” such as the signing gorilla Koko (human trainer/researcher Penny Patterson) and the grey parrot Alex (human trainer/researcher Irene Pepperberg). We will look at several films when things go amiss, such as Grizzly Man (Dir. Werner Herzog 2005) and Cat Dancers (Dir. Harris Fishman 2008), as well as the underwater fiction films Jaws, Finding Nemo, Orca, Flipper, and Day of the Dolphin. Our investigation of film will focus our research and discussion on textual narratives from the “Point of View” of animals themselves, such as the harrowing “First-person” account of the "afterlife" of a chimney-sweep turned into a kind of amphibian in Charles Kingsley's The Water Babies, Alice in Wonderland, My Dog Tulip, and perhaps various chronicles of Narnia. As well, we will visit the harrowing human-authored life of an elephant in Barbara Gowdy's The White Bone, narratives of ecosystems (Life and Death of a Salt Marsh) and legal cases in which the matter of the animal or plant might have formal standing. Students will be required to keep a weekly diary from the point of view of a living, non-human animal, to discuss challenging materials in a variety of media, and to complete a research paper on human-animal relations in consultation with the instructor.